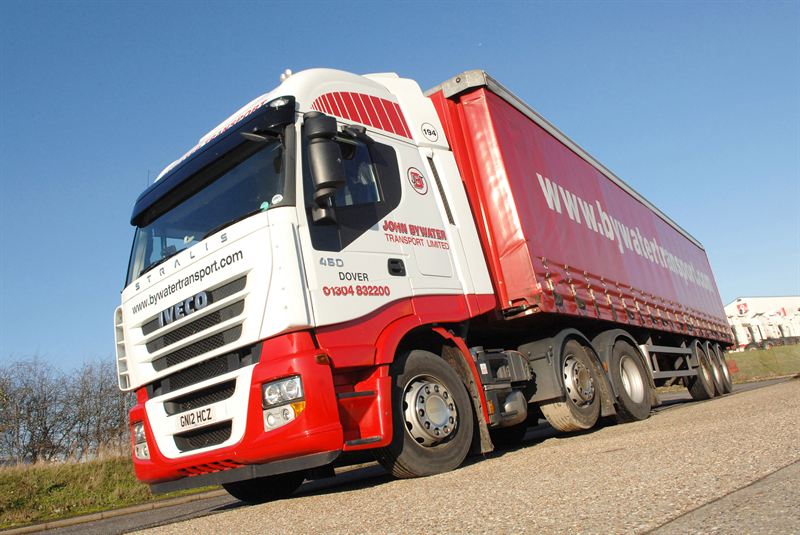 Managing Director John Bywater says this compares favourably against his 40-strong fleet’s average of 8.25mpg, with the two vehicles on course to save an estimated 4,355 litres of diesel each per year in comparison.

Bywater says: “The ECOSTRALIS’ have proven to be very economical at the pumps and are returning the best fuel consumption figures we’ve seen.  You always get a slight difference between comparative vehicles from different manufacturers, but in the case of the Iveco vehicles they are a league apart – and have been consistently since entering service.

“On the back of this performance, I’ve ordered an additional ECOSTRALIS which will join the fleet this month,” he adds.

John Bywater Transport began its comparative fuel trial following an influx of new vehicles which began in 2011 – part of a major fleet refurbishment and business investment process.  Amongst the new 61- and 12-registration vehicles are tractor units from DAF, MAN, Mercedes-Benz and Volvo.

Key to the fuel savings is a re-mapped version of the FPT Industrial Cursor 10 engine – fitted as standard in the ECOSTRALIS – which helps to reduce fuel consumption whilst maintaining performance.  The EEV-rated 10.3 litre engine is capable of producing up to 460 hp and a maximum torque of 2,100 Nm between 1,050 and 1,550 rev/min.

Iveco has matched this engine with an array of additional fuel-saving features which enable the ECOSTRALIS to be so efficient.  These include an ECOSWITCH device that uses the vehicle weight information from the ECAS / EBS systems to limit engine torque according to the truck’s gross vehicle weight – ensuring overall performance is maintained in line with that of a fully laden vehicle.   This allows fuel consumption to be minimised during acceleration without affecting overall speed capability.

The ECOSTRALIS also features a EuroTronic transmission with a new ECOfleet mode which automatically adjusts to the loading of the vehicle to help fine-tune fuel economy.  Both the ECOSWITCH and ECOfleet mode are standard features on the new International Truck of the Year winning Stralis Hi-Way, which will be officially launched in the UK in early 2013.

John Bywater Transport began operating in 1986 and became a Pall-Ex member in 2009. The company’s fleet is spread between depots in Dover and Shrewsbury.