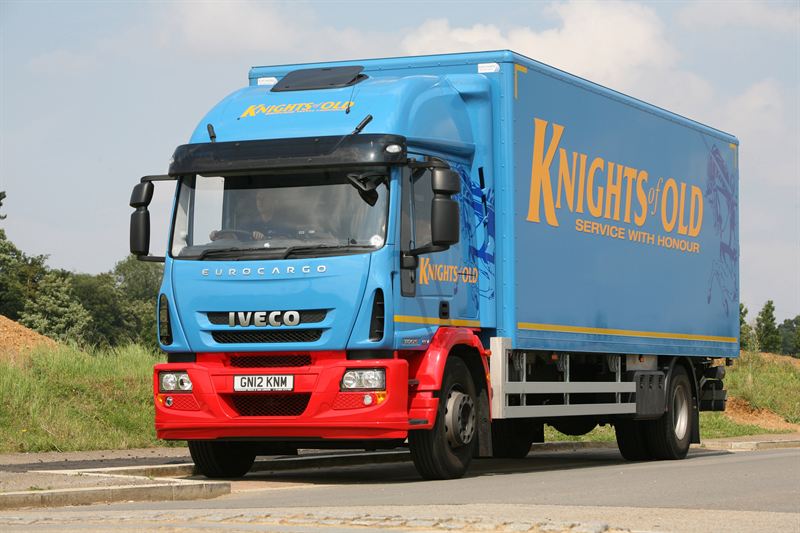 Stormont Truck & Van has delivered the first new Ivecos into service with transport and logistics specialist Knights of Old, which in November 2011 merged with long-time Iveco customer Mainland Group.

Operating from the company’s head office in Kettering, Northamptonshire, the new deliveries include 10 Eurocargo 75E16 7.5 tonners and two Eurocargo 180E25 18 tonners, with a mix of box and curtainside bodywork and Dhollandia tail-lifts. A New Daily 35S13 chassis cab with a curtainside body complete the latest deliveries, with each vehicle supplied on a five year repair and maintenance agreement via the dealer.

The new Ivecos join a combined group fleet totalling 170 trucks and 192 trailers and will be used for general haulage throughout the UK up to six days per week.  They are each expected to cover up to 110,000 km a year.

Commenting on the delivery, Ian Beattie, Managing Director of Knights of Old, says: “Ivecos were the mainstay of the Mainland Group fleet and have delivered exemplary service since our two operations merged last year.  We’ve been impressed with their competitive fuel economy and payload capacity; replacing like for like was an obvious choice.”

Beattie adds: “When we order new trucks the decision is based as much on aftersales back-up as it is on product.  Stormont Truck & Van don’t rest on their laurels and we rely on them to provide us with strategic-level support, around the clock.  They have enjoyed a long relationship with Mainland Group, and haven’t disappointed since we began trading with them as Knights of Old.”

Each of the new vehicles benefits from an advanced Verilocation tracking device and a reversing camera, helping to guarantee maximum load security, vehicle protection and road safety.

Both of the Eurocargo models are fitted with Iveco’s Eurotronic automated gearbox as standard, whilst the Daily has a similar AGile automated transmission.  These two-pedal set-ups suit the amount of time each vehicle spends making deliveries in urban areas, helping to make driving more comfortable and safer for drivers in an environment where traffic congestion means stop/start driving is commonplace.  The automated gearbox also eliminates the risk of over-revving the engine and ensures the vehicles are always in the right gear, helping to prolong clutch life and maximise fuel efficiency.

Knights of Old enjoy an esteemed company history which began when William Knight began transporting goods for the local community back in 1865, using a horse and cart.  The company first took the name Knights of Old Ltd in 1957 and began to focus on general haulage in 1968.  Today it operates a 24 hours a day logistics service for clients and is a major shareholder in the national distribution consortium, Partnerlink, and a member of the Palletforce network.