International Truck of the Year prepares for CV Show debut 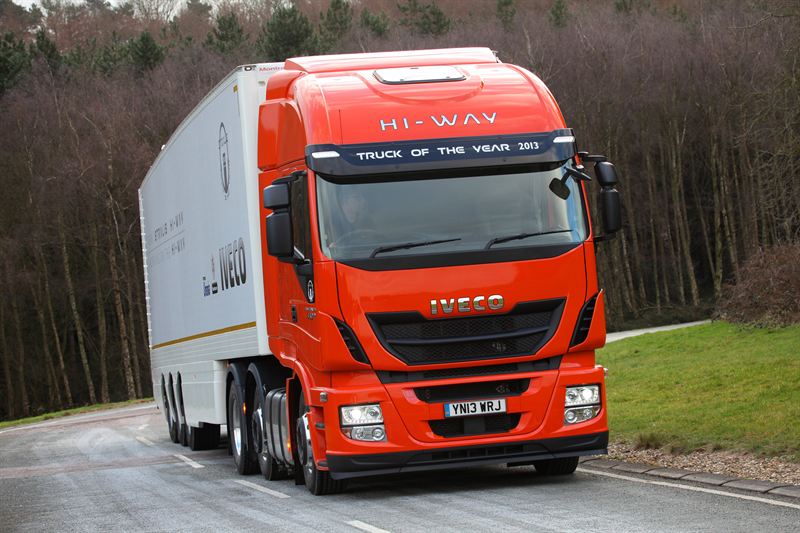 A trio of International Truck of the Year-winning Stralis tractor units will take pride of place on Iveco’s 864m² stand at this year’s Commercial Vehicle Show, joined by a static display example of FPT Industrial’s ground-breaking Euro VI engine.

The feature vehicle will be a Euro VI example of Iveco’s new long-haul Stralis Hi-Way 4x2 tractor unit, the first of its kind to arrive on UK shores and making its public debut at the NEC.

It will be joined on the stand by a pair of EEV-rated Stralis’, including a 6x2 Stralis Hi-Way powered by a 500 hp engine, and a 460 hp 6x2 Stralis Hi-Road, the preferred model for distribution and fleet operations as well as medium to long-haul domestic missions.

Together these three vehicles – plus a further two Stralis Hi-Way external displays models – will highlight the increased focus which Iveco is placing on the UK tractor unit market.

Also on show will be an example of the FPT Industrial Euro VI engine.  Iveco and FPT Industrial have achieved what no other commercial vehicle or engine manufacturer have been able to, meeting the stringent Euro VI limits without the use of exhaust gas recirculation.  By using an engine with high efficiency selective catalytic reduction, Iveco says customers will benefit from weight reduction, lower fuel consumption and increased durability thanks to a less complex, yet highly efficient, technology.

Nigel Emms, Director of Press & PR at Iveco UK, says: “This is a hugely important year for the truck market and we’re expecting a lot of interest in our new Stralis range. Only one manufacturer has the prestige of showcasing the International Truck of the Year 2013 on its stand, and we’ll have three examples on display, plus a further two outside. We’re preparing for a very busy exhibition.”

Also making its official debut in the UK will be Iveco’s new on/off-road Trakker Hi-Land, with a 410 hp 8x4 rigid finished in Dakar green factory colours, made famous by Petronas Team De Rooy in the last two Dakar Rallies.

Iveco’s medium range of vehicles will be represented by a low-height Eurocargo 120EL18/P, built specifically for multi-drop urban distribution. This platinum silver 12 tonner features a low frame, which combined with a ‘one-step’ entry design, significantly eases access to the cab.

Joining the truck range will be two 3.5 tonne Dailys – one panel van, also in striking platinum silver paintwork, and a chassis cab model, featuring a 7-man crew-cab and an Ingimex tipper body.  Both vehicles feature Iveco’s new stop/start engine technology, which shuts off the engine when the vehicle stops with the transmission in neutral and restarts automatically when a gear is selected.

Iveco employs almost 25,000 people and runs in 11 Countries in the world using excellent technologies.  Besides Europe, the company operates in China, Russia, Australia and Latin America.  Around 5,000 sales and service outlets in over 160 Countries guarantee technical support wherever in the world an Iveco vehicle is at work.