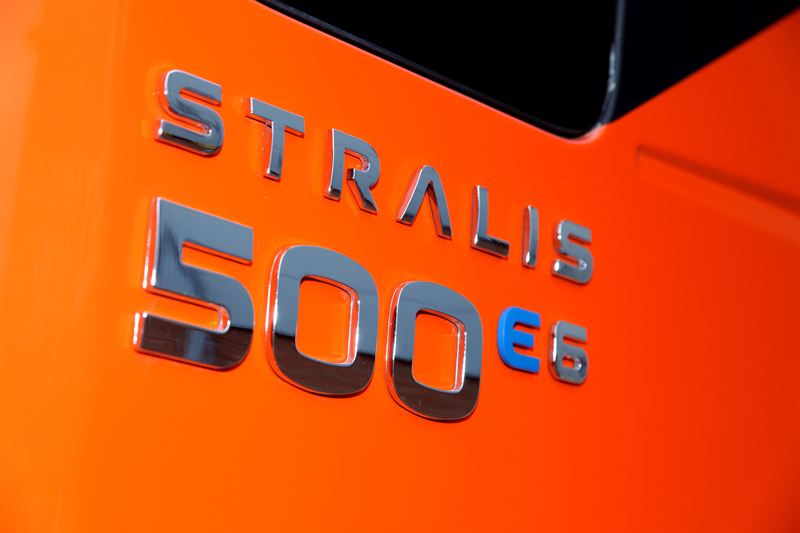 Iveco is using the occasion of the CV Show 2013 to debut its Euro VI engine technology in the UK. The manufacturer says its Euro VI power plant stands head and shoulders above the competition for meeting the stringent new emission limits without the use of exhaust gas recirculation (EGR).

The feature vehicle on Iveco’s 864m² stand will be a 500 hp Cursor 13 Euro VI example of its International Truck of the Year 2013-winning long-haul Stralis Hi-Way 4x2 tractor unit (AS440S50T/P).  Also on show will be a standalone example of an FPT Industrial 480 hp Cursor 11 Euro VI engine.

Iveco and FPT Industrial have achieved what no other commercial vehicle or engine manufacturer have been able to, achieving Euro VI without the use of EGR.  By using an engine with high efficiency selective catalytic reduction (HI-eSCR), Iveco says customers will benefit from weight reduction, optimised fuel consumption and increased durability thanks to a less complex, yet highly efficient, technology.

Martin Flach, Product Director of Iveco UK, says: “We can offer fleets a Euro VI engine which follows the same path of technical development as our Euro IV, Euro V and EEV-rated engines of previous years.

“Critically, this allows us to simplify the after-treatment system and to use the same ‘body-in-white’ of the previous generation Stralis, since our Euro VI engines do not require any additional cooling.”

With the launch of Euro VI Stralis, Iveco has adopted FPT Industrial Cursor 9, Cursor 11 and Cursor 13 engines, offering displacements of 9, 11 and 13 litres respectively.  There are nine power variants for the Euro VI diesel versions (from 310 to 560 hp) and three natural gas versions (from 270 to 330 hp).

All engines offer optimised fuel consumption and excellent performance, with maximum torque available at very low speeds (starting from 1,000 rev/min).  For Euro VI, the Stralis’ EuroTronic gearboxes have been specially modified by ZF to match the new engines – helping to reduce the number of gear changes, which leads to higher efficiency and maximum driving comfort.

An impressive operating range is guaranteed thanks to fuel tank capacities of up to 1,320 litres.  Furthermore, all of the powertrains are equipped with a three-stage decompression engine brake, which provides additional stopping power and helps to reduce the wear and maintenance costs of the braking system.

On the Euro VI engines, an all-new Super Engine Brake (SEB) uses an exhaust throttle valve to improve the performance of the new engine by up to 30 per cent compared to current Euro V engines.  The engine brake is integrated with the service braking system and with the auxiliary retarder.

Key for the optimisation of combustion efficiency is the high average cylinder pressure and the high injector pressure.  In order to achieve these results, significant changes have been made to the design of the crankcase and cylinder head, which have led to greater structural rigidity, increased coolant circulation and greater nominal capacity.

The Euro VI engine range features a latest generation common rail injection system, with a maximum injection pressure of up to 2,200 bar.  A new electronic control unit has been introduced for the management of engine parameters and the accurate control of the after-treatment system of exhaust gases.  A new control unit has been designed to optimise the compactness and to integrate the functionality of the engine, the HI-eSCR system and diesel particulate filter (DPF).

In order to ensure reduced environmental impact, the engines have been provided with a closed circuit breather system.  And to prevent the dispersion of oil vapours into the blow-by gases of the engine, high-performance oil separation systems have been introduced, which help to minimise the risk of contaminating the DPF.

Thanks to the combustion optimisation program, particulate emissions from the engine are already reduced and the forced active regeneration of the DPF is therefore not necessary, which is important in terms of fuel consumption and periodic maintenance.

Furthermore, since only clean filtered air enters the engine instead of recirculated exhaust gases, wear is maintained at very low levels and oil change intervals are longer, with corresponding maintenance intervals of up to 150,000 km.

This also helps to guarantee lower operating costs, increased reliability and higher power output without necessarily having a sophisticated system of air management.  The simple and compact design of the engine and of the High Efficiency after-treatment system helps to reduce weight and minimises obstructions in the engine compartment.

The new Stralis Euro VI engine range is characterised by increased capacity and stands out for its exclusive HI-eSCR, a patented FPT Industrial system representing the very latest in heavy-duty diesel engine technology.

Iveco and FPT Industrial have increased the efficiency of the engine and reduced the particulate produced by the combustion process, due to the absence of the recirculated exhaust gases.  The remaining amount of particulate is reduced in the DPF, while the nitrogen oxides are reduced in the exhaust system, with the valuable improvement in fuel consumption, performance and reliability which this brings.

The FPT Industrial HI-eSCR system can reduce NOx levels by more than 95 per cent.  The after-treatment technology for Euro VI vehicles is unique and exclusive to FPT Industrial, since it meets the strict limits for nitrogen oxide emissions, thanks to the selective catalytic reduction system, and without any need for the recirculation of exhaust gases.  In particular, the system includes:

It is also equipped with a network of integrated sensors to monitor nitrogen oxide emissions and possible excessive levels of NH3 (ammonia).  Thanks to the extremely high efficiency of the HI-eSCR catalytic reduction system, the new Stralis is the only heavy-duty vehicle on the market to meet the Euro VI limits without the use of EGR.

This ensures major advantages over the competition:

Iveco employs almost 25,000 people and runs in 11 Countries in the world using excellent technologies.  Besides Europe, the company operates in China, Russia, Australia and Latin America.  Around 5,000 sales and service outlets in over 160 Countries guarantee technical support wherever in the world an Iveco vehicle is at work.