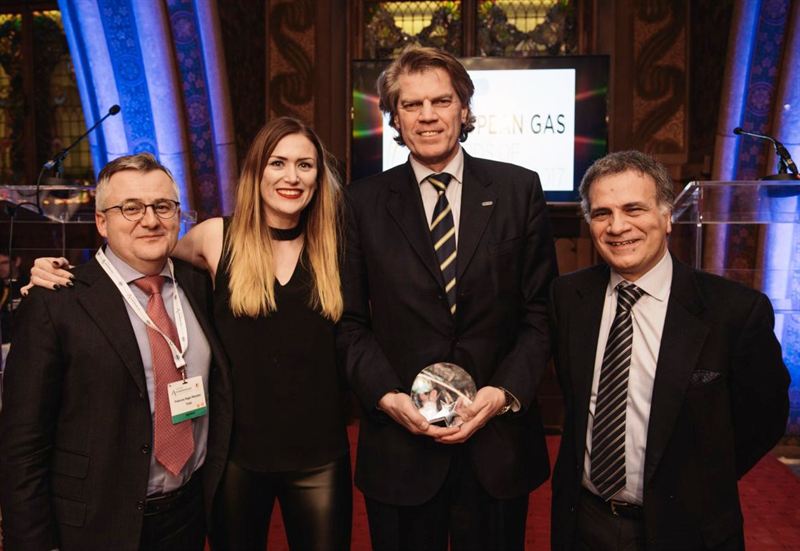 IVECO was in a shortlist of five companies in the “Project of the Year” category of the European Gas Awards of Excellence 2017, which recognises the ‘most exciting projects in the European gas market’

IVECO Stralis NP, the first natural gas truck for long-haul operations, has been voted “Project of the Year” at the European Gas Awards of Excellence 2017, during the European Gas Conference, the annual meeting for the European gas industry, held in Vienna (from 23 to 25 January 2017), which gathers more than 450 key representatives from regional governments and industry leaders and more than 80 gas producers, to address issues related to Europe’s energy future.

Pierre Lahutte, IVECO Brand President, commented: “We are very proud that IVECO has been again rewarded for its commitment to sustainability. IVECO saw very early that the future of transport was in sustainable alternatives solutions. Our New Stralis NP, voted “Project of the Year” at the European Gas Awards of Excellence 2017, is a revolutionary gas truck for sustainable transport: it builds on IVECO’s extensive expertise to take a step into the future: it is the first true long-haul gas truck in the market that offers a real alternative to diesel vehicles and the most sustainable long-distance transport truck ever.”

The second day of the European Gas Conference 2017 has been closed with the 6th annual European Gas Awards of Excellence 2017 which celebrates “the dedication, triumphs and excellence of companies and personalities pioneering innovation, inspiring others and achieving growth in the European Gas market”. Within the category “Project of the Year” award, IVECO and four other shortlisted companies presented the latest developments on the newest and most exciting projects in the European gas market.

During the discussion panel “Making the difference in the European gas industry”, IVECO presented its vision for sustainable heavy duty transport that led to the development of the Stralis NP (Natural Power), the first natural gas powered truck for long-distance haulage.

The brand was the first manufacturer in the world of commercial transport to understand the potential of natural gas, anticipating some of the recommendations of the European Commission published in the communication “A European Strategy for Low-Emission Mobility”, which states that Liquefied Natural Gas for heavy duty vehicles is strategic for Europe, providing a solution to most of the issues we face today: local air quality, since NOx and PM emissions are extra-low, but also global warming – and finally noise.

IVECO created a market for natural gas powered transport vehicles, starting from refuse collection in 1996, followed by urban, then regional and inter-regional distribution, all the way to long-distance heavy-duty haulage with the launch in 2016 of the Stralis NP.

Karl-Martin Studener, IVECO Business Director Austria, Central & Eastern Europe explained during the conference: “IVECO introduced in the market natural gas versions of trucks, vans and buses, and as a result today more than 16,000 IVECO gas powered vehicles are running on European roads. Our Natural Power technology is future-proof in that it provides a solution to polluting emissions with low Total Cost of Operation – and the added advantage of low noise levels, so important for urban missions. And even more, with the growing availability of bioCNG and bioLNG in Europe, all transporters are now able to provide a CO₂-Neutral transport and to contribute to European energy independence.”

The big-capacity fuel tanks take the range autonomy of the LNG-only version to the record level of 1,500 km. The engine, combined with the 12-speed automated gearbox, with eco roll function, lowers its fuel consumption by 5% compared to the previous model.

IVECO is a brand of CNH Industrial N.V., a World leader in Capital Goods listed on the New York Stock Exchange (NYSE: CNHI) and on the Mercato Telematico Azionario of the Borsa Italiana (MI: CNHI). IVECO designs, manufactures and markets a wide range of light, medium and heavy commercial vehicles, off-road trucks, and vehicles for applications such as off-road missions.

The brand’s wide range of products include the Daily, a vehicle that covers the 3 – 7.2 ton vehicle weight segment, the Eurocargo from 6 – 19 tons, the Trakker (dedicated to off-road missions) and the Stralis, both over 16 tons. In addition, the Iveco Astra brand builds off-road trucks, rigid and articulated dumpers as well as special vehicles.

IVECO employs close to 21,000 individuals globally. It manages production sites in 7 countries throughout Europe, Asia, Africa, Oceania and Latin America where it produces vehicles featuring the latest advanced technologies. 4,200 sales and service outlets in over 160 countries guarantee technical support wherever an IVECO vehicle is at work.