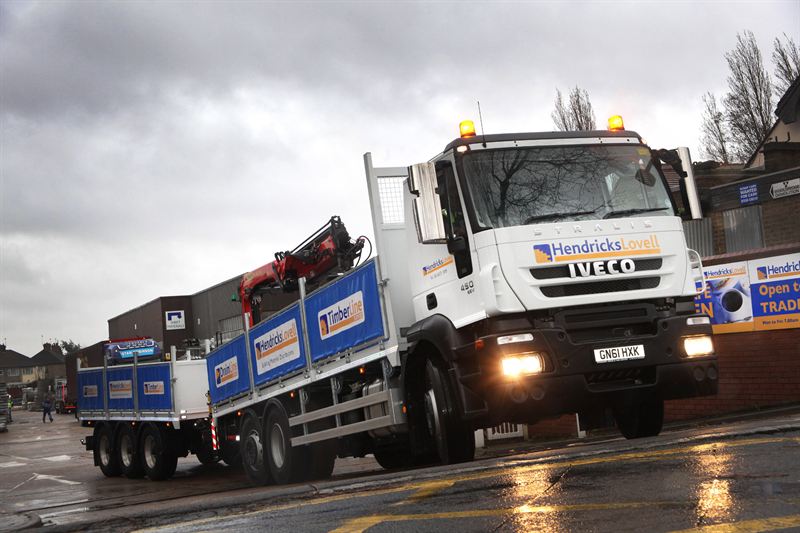 The order includes three Stralis AD260S31Y/PS 6x4 rigids and one Stralis AD260S45Y/PS 6x4 rigid which will operate with a drawbar trailer.  All four vehicles are mounted with a remote control Palfinger PK14001EH crane with a JSC grab and feature a steering rear axle, to aid manoeuvrability when operating on construction sites and in restricted urban areas.

It marks the first new vehicle deliveries of the year to a division of Grafton Merchanting GB, the fourth largest builders merchant in the UK, and follows total orders in 2011 which included 96 Dailys, 42 Eurocargos and 81 Stralis’.

Phil Alexander, Head of Transport at Grafton Merchanting GB, says: “The Stralis forms the backbone of our heavy truck fleet.  It’s the perfect 26 tonne rigid for delivering loads which can range from bricks and blocks to timber and jumbo bags of aggregate.  The rear-steering axle makes these particular models ideally suited to work within the M25.”

The new trucks will be in operation six days a week, making deliveries to building sites and private residences throughout Greater London and the Home Counties.  They each operate with a single driver and are expected to make up to 15 drops per day.

Both of the models supplied feature Euro-5 beating FPT Industrial engines, each certified to meet the stringent Enhanced Environmentally friendly Vehicle (EEV) level.  Iveco is currently the only UK truck manufacturer to offer EEV engines as standard – a level which serves as a stepping stone between Euro 5 and Euro 6, with diesel particulates cut from 0.03 to 0.02 g/kWh.

The Stralis AD is popular with builder’s merchants and construction companies as it is built specifically for short-haul transportation, whilst still allowing the driver to enjoy the same comfortable air-suspended seat as in the flagship Active Space (AS) range.

Iveco employs almost 25,000 people and runs 24 production units in 11 Countries in the world using excellent technologies developed in 6 research centres. Besides Europe, the company operates in China, Russia, Australia and Latin America. Around 5,000 sales and service outlets in over 160 Countries guarantee technical support wherever in the world an Iveco vehicle is at work.

Grafton Merchanting GB was formed in 2008 to integrate Grafton Group plc’s GB merchanting businesses within a single structure.   GMGB is the fourth largest business in the builders and plumbers merchants’ industry.

The business trades from more than 400 locations, employs approximately 7,500 staff and has a turnover in excess of £1bn.