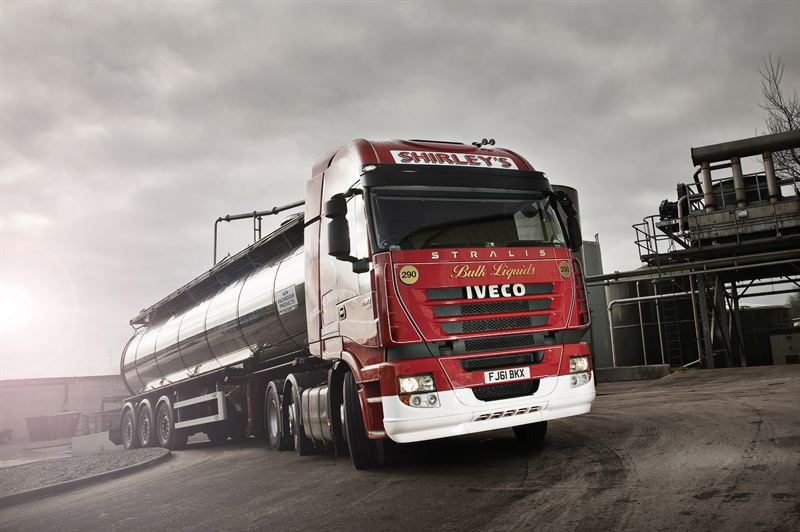 The delivery marks the first Stralis’ to join the tanker specialist’s current fleet of 65 trucks and 110 trailers.  Both new 6x2 twin steer tractors have been specified with PTO-driven pumping gear and will operate up to six days a week, transporting oils and fats nationwide.

Neil Bourne, General Manager at Shirley’s Transport, says: “We were in the market to replace a couple of tractors and the Stralis stood out for its competitive whole life costs.  Factory lead times were reasonable and the specification of the top-of-the-range Active Space model was the perfect match for our requirements and provided much better value for money than our normal choice of tractor.

“We will be monitoring the performance of both the Stralis’ and Sherwood Truck & Van over the coming months,” adds Bourne.  “Our mixed fleet means we can draw direct comparisons against a number of different marques and dealers.”

The specification also includes Iveco’s automated EuroTronic transmission, continuing the trend Iveco started with the launch of the original Stralis in 2002, when it became the first heavy truck to be fitted with an automated gearbox as standard.

Shirley’s Transport, which traces its roots back to 1936, purchased its first tanker in 1966, with bulk liquid transport forming the mainstay of its business by 1974.  Today the company runs vehicles from five locations throughout England and Scotland. In addition to its regular tanker fleet, it also operates specialist tankers for farm deliveries, tippers for sand and aggregates and curtainside vehicles for palletised / dry goods.