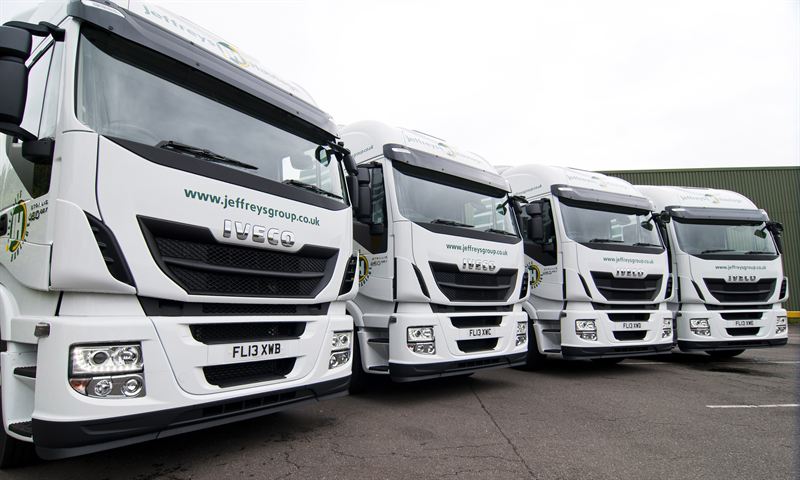 Jeffreys Haulage ordered its first four Stralis Hi-Way (AS440S46TX/P) twin-steer tractor units after seeing the International Truck of the Year 2013 on the Iveco stand at the CV Show.

Two of the new vehicles are additions to the Derbyshire-based firm’s 33-strong fleet and two are replacements for older Iveco trucks, increasing the number of Ivecos on its fleet to 14. All four of the tractor units were delivered by local Iveco dealer Sherwood Truck & Van.

The new vehicles are being used to deliver consumable goods into regional distribution centres across the UK for customers including Nestlé and United Biscuits, as well as general haulage.

Mick Warren, Co-owner of Jeffreys Haulage, says: “We had heard a lot of good reports about the new Stralis Hi-Way so we went to see it for ourselves at the CV Show in April. We were very impressed with everything about the vehicle, particularly favouring the sleek new modern design and the addition of so many new technological features.

“What our drivers liked most was the size of the new Hi-Way cab and the extra space it offers. Plus, in terms of fuel efficiency, one of the new vehicles we are running in is already achieving 10.2 miles per gallon, boosted significantly thanks to Iveco’s Driving Style Evaluation tool.”

Operating seven days per week, most of the new vehicles are double-shifted. They are expected to clock up 160,000 km per annum and will be kept in service for at least five years.

The vehicles, which all run in the company’s green and yellow livery, will operate primarily with curtainsider trailers at maximum weights of up to 44 tonnes. They have each been supplied on Iveco Elements repair and maintenance contracts.

All of the new Iveco tractors are powered by EEV-rated FPT Industrial 10.3 litre Cursor 10 engines, which are capable of producing up to 460 hp between 1,550 and 2,100 rev/min, plus 2,100 Nm of torque between 1,050 and 1,550 rev/min. They also feature Iveco’s proven EuroTronic automated transmission as standard.

Jeffreys Haulage is a privately-owned company with more than 35 years’ experience in distribution and warehousing. Based in Swadlincote, the company’s purpose-built 16-acre main site houses a 105,000 sq ft racked warehouse, with a dedicated 23,000 sq ft transport operation, workshop and administration block.

Iveco, a Fiat Industrial company, designs, manufactures and markets a wide range of light, medium and heavy commercial vehicles, off-road trucks, city and intercity buses and coaches as well as special vehicles for applications such as firefighting, off-road missions, defence and civil protection. Iveco employs over 26,000 individuals globally. It manages production sites in 11 countries throughout Europe, Asia, Africa, Oceania and Latin America where it produces vehicles featuring the latest advanced technologies. 5,000 sales and service outlets in over 160 countries guarantee technical support wherever an Iveco vehicle is at work.