Almost 1 in 3 Euro 2016 Players could play for other countries - is this the most diverse football tournament ever? 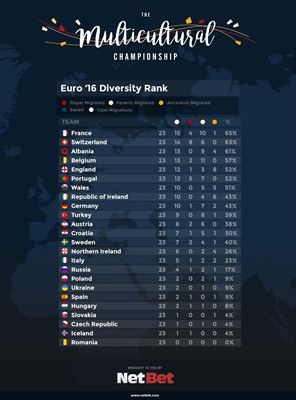 Findings from NetBet.co.uk showcase the importance of multiculturalism at a time when migration and the Brexit are top of the news agenda.

Almost one third of the players in this year’s Euro 2016 have roots outside of their chosen home nation, according to research from online betting site NetBet.

Only European nations can take part, but a closer look at the origins of each player reveals just how diverse the tournament really is.

The Multicultural Championship, by online bookmaker NetBet, celebrates this by tracking the origins of all 552 players in the tournament and presenting them as an interactive trademap and league tables here: www.netbet.com/multicultural-championship

166 players selected to represent their home nation can trace their heritage elsewhere, including England captain Wayne Rooney and Harry Kane, the man who the Three Lions will rely on heavily for goals.

Both could have played for the Republic of Ireland through grandparental and parental descent respectfully, while five players in Roy Hodgson’s squad have close ties with Jamaica.

In total, 12 of England’s squad have ancestry from beyond the nation, the fifth most diverse in the competition. Both the Welsh and Republic of Ireland fall just beneath this, with the latter benefitting from a FIFA ruling allowing players born from both Northern or the Republic eligible to represent either nation.

It’s the host nation which represents the most diverse nation however, with 65% of the French squad having roots elsewhere, 11 of those hailing from Africa.

Perhaps most interesting however are the Swiss and Albanian squads, both of whom have multiple players eligible for both. The pair go head-to-head on June 11 with Albania potentially fielding as many as six players with Swiss connections, including Taulant Xhaka the brother of Swiss midfielder Granit Xhaka.

It’ll be the first time in European Championship history that two brothers have faced off against each other and is reminiscent of the 2014 World Cup when Ghana’s Kevin Prince Boateng took on his brother Jerome, who represents Germany.

A representative from NetBet said, “We're really proud of the map, to us it really helps show how the Euro's, and international football as a whole, is an incredible tool which brings countries and culture together time and time again. France 2016 will be an amazing show of diversity and celebration. We're thrilled to be involved.”

You can find the full site at www.netbet.com/multicultural-championship and use the interactive map to find out exactly who hails from where.

NetBet are an established brand in regulated European markets including The UK, France, Italy, Spain, Ireland, Belgium and Romania. The company offers Sports-Betting, online Casino, and Poker to its customers. The company are sponsors of West Bromwich Albion for the 2015 - 16 season, they also sponsor St Etienne and Ajaccio in France.

Sent by Manchester PR agency jwc, on behalf of NetBet.co.uk