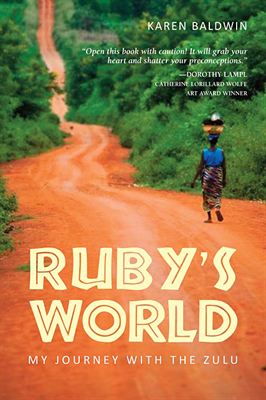 Karen Baldwin, author of Ruby’s World – My Journey with the Zulu, believes in global volunteerism.  Now she helps bring awareness of non-profit efforts toward equality for African women.

Baldwin knows firsthand the struggles women face in South Africa. She witnessed many of the issues Ngubane battles on a daily basis. The imbalance of power for women is such that if a woman is not married, she holds no rights to property, a job, or freedom.

“I was searching for purpose after surviving a heart attack and breast cancer,” says 57-year-old Karen Baldwin. “I was invited to be the first white teacher in a rural Zulu elementary school. Naïve, I set off from San Francisco alone for South Africa,” Baldwin explains.  “At first I was welcomed in my efforts, but then threatened with my life because, in part, I stood against the cruelty that Ngubane is working to end. Since returning home from South Africa, I have been searching for a non-profit to give my support.”

Ngubane intends to make a change in the lives of women and children in South Africa by fighting against rape, forced marriage, AIDS, female genital mutilation, and reversion to male dominated tribal rule. In the past year, she has spoken on their plight at many international conferences, including two visits to the United Nations in New York as a representative on the Commission on the Status of Women.

“I divide my available time between helping uplift approximately 50,000 rural women in impoverished areas of KwaZulu-Natal and attending overseas conferences to speak on issues aimed at action to improve the lot of women,” states Ngubane. “We are so blessed to have Ms. Baldwin join our cause as our Ambassador for the RWM to shed more light on this desperate matter.”

Baldwin is humbled by the trust that the non-profit organization has placed in her efforts.

“When RWM asked for my help, I was honored. Hopefully, I can make a difference by bringing more attention to the RMW and therefore more support,” Baldwin states. “My role is to create awareness of their cause here in the US, to be their US media liaison, to assist with fund raising efforts, and to compile and edit an anthology of stories from the rural women.”

Baldwin adds, “My experience in Africa was life changing. My dream of helping became a nightmare when my hosts turned against me and threatened my life. But everything I witnessed is exactly what this organization is working to correct. If I can help make a change, then the threats against my life at least had a purpose.”

Following a successful career in civil engineering in the San Francisco area, Karen Baldwin turned her focus to her lifelong desire to serve the needs of women and children. She graduated from the Chaplaincy Institute for Arts and Interfaith Ministry and earned a certificate in Spiritual Psychology from the West Coast Kabbalah School.

Before moving to New Mexico in 2009, she was a hospital chaplain with Kaiser Permanente in California, specializing in neo-natal intensive care. Today, in addition to being an author, she presents workshops on using dreams as a compass for life and delivers inspirational lectures on navigating the human condition.

Karen is a mother, auntie, daughter, sister, and grandma. She is pleased to be of service to the rural women and children of KwaZulu-Natal, South Africa. She can be reached at www.revkarenbaldwin.com.

The Rural Women’s Movement of KwaZulu-Natal was chosen as a finalist in the 2010 Drivers of Change awards by the Southern Africa Trust. The criteria in the annual competition is that entrants must demonstrate their commitment to sustained development within communities to ensure a better future for all South Africans.

Nearly 70 years ago, an elderly South African man dictated his will to his youngest child, informing her that she would equally share in the division of his property. That little girl grew up to become the mother of Sizani Ngubane of the Rural Women’s Movement in KwaZulu-Natal Province, South Africa. Today, Ms. Ngubane works to educate women with HIV/AIDS of their inheritance rights in a country where women are being disenfranchised because of the illness.

RWM serves over 50,000 women and 2,000 orphans in rural South Africa. They are part of a 21 organization alliance that works toward preserving constitutional rights for rural citizens.

Their primary focus is to advocate for women's independent land housing, inheritance, and property rights. They also provide training and strategic assistance for the HIV/AIDS crisis.

When You Want To Get Noticed!

Searching for purpose after surviving a heart attack and breast cancer, 52-year-old Karen Baldwin set off alone for South Africa as the first white teacher in a rural Zulu elementary school. Her suitcases bursting with books and art supplies, Karen was greeted at the tiny airport by Ruby Ndlela of the Zinti School. Karen’s African hosts seemed eager to pursue their dreams of English proficiency and computer literacy for their “learners,” but the Zulus’ desire for westernization soon conflicted with strong tribal traditions. Karen’s goodwill was stretched to the breaking point by encounters with infant scarification, female genital mutilation, and witch doctor dominance. Even worse, Ruby suddenly turned on Karen and she found herself afraid for her life, trapped in a concrete room on a locked compound until she could make her escape. “I hope every reader comes away from Ruby’s World, as I did, with deeper self-awareness and an inquisitive heart,” said Baldwin. Rave Reviews of Ruby’s World, My Journey with the Zulu • “Baldwin’s masterful memoir reads like a suspense thriller.” New Mexico journalist and photographer Phaedra Greenwood• “Ruby’s World is … an extraordinary story, beautifully told … honest, moving, frequently funny, sometimes startling, and always compelling. It carries the reader along every twist and turn with remarkable clarity and grace.” Award-winning author Sean Murphy• “Gripping, honest, and illusion-shattering.” Nancy Schluntz• “Great book about survival in Africa. Well written and spell binding.” Christopher L Ellis• “I think my heart stopped beating a couple of times toward the end of the book. Kitchen Maven• “A peak behind the curtain at what really goes in other cultures.” Tara Lumpkin• “Baldwin does not pull away from asking difficult questions of others as well as herself. Miriam Moussaioff• “Ruby's World reminded me that in learning about different people, one learns even more about his or herself.” KMB Book DistributionRUBY’S WORLD – My Journey with the ZuluThe Apocryphile Press; Berkeley, California; 370 pageswww.apocryphile.orgISBN 978-1-937002-10-7Available on Amazon http://amzn.to/Rubys-World ($22.95), Kindle http://amzn.to/RubyonKindle ($9.95), and in fine bookstores everywhere. Distributed through Ingram Book Company. About the Author In mid-life, Karen Baldwin turned her back on a successful career in civil engineering to focus on her lifelong desire to serve the needs of women and children. She graduated from the Chaplaincy Institute for Arts and Interfaith Ministry and earned a certificate in Spiritual Psychology through the West Coast Kabbalah School. Prior to leaving California, she worked as a hospital chaplain with Kaiser Permanente, specializing in neo-natal intensive care. Today, she lives in Taos, New Mexico. She presents workshops nationally on the power of dreams as a compass for life and maintains a spiritual direction practice. Ms. Baldwin is available for guest lectures, readings, and interviews. Website: www.RevKarenBaldwin.com 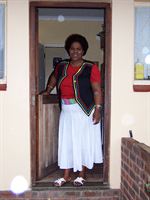 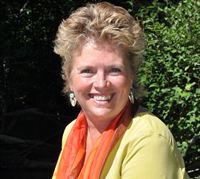