A culinary journey through time in Karlsruhe, the fan-shaped city 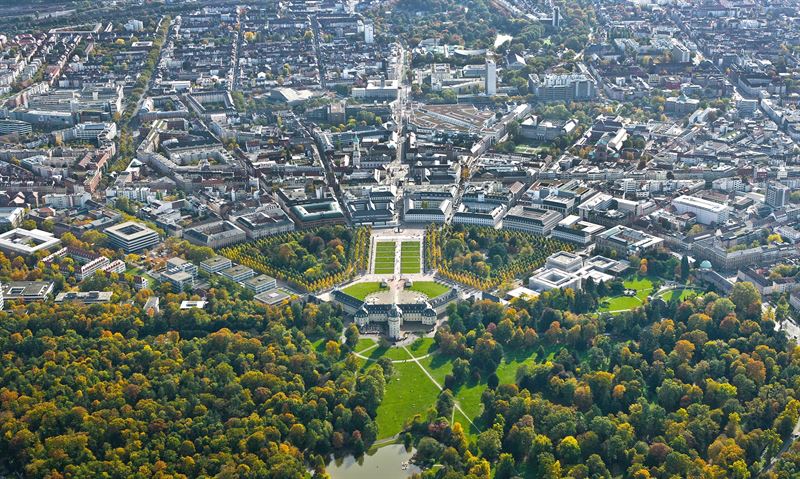 Karlsruhe, October 18 2019 – The story of the city of Karlsruhe in southern Germany begins in 1715, when the foundation stone of the Residenzschloss was laid. The city won worldwide renown for its fan-shaped plan, which even inspired the street design of Washington D.C. The palace, one of the most important buildings in Karlsruhe, has been home to the Badisches Landesmuseum (Baden State Museum) since 1919. On the occasion of its centenary, it will host the exhibition “Emperor and Sultan – Neighbours in the Heart of Europe 1600–1700” as from October. Visitors can also experience history first-hand in the medieval district of Durlach. And they cannot fail to indulge in the many wines! One of the warmest cities in Germany, Karlsruhe is surrounded by top wine-growing areas. Now, in the fall especially, when the grape harvest is in full swing, tasting the exquisite wines of the Badische Weinstrasse (Baden Wine Route) or the Staatsweingut Karlsruhe-Durlach is a must.

Let’s celebrate: The Badisches Landesmuseum in Karlsruhe Palace turns 100
The palace served as the seat of government and residence of the margraves and grand dukes of Baden until 1918. A year later, the Badisches Landesmuseum (Baden State Museum) was established here. One of the most active museums of cultural history in Germany, it records art and history from prehistory and ancient history, through antiquity, to the 21st century. The palace complex burned down in an air raid in September 1944, severely damaging the museum’s artifacts. When it was rebuilt, the façade was restored to its former glory, while the interior was designed to meet the museum’s contemporary needs. www.karlsruhe-erleben.de/en/media/attractions/Karlsruhe-Palace

One of the main events on the occasion of its 100th anniversary is the special exhibition “Emperor and Sultan – Neighbours in the Heart of Europe 1600–1700” from October 19, 2019, to April 19, 2020. This is the first time that the Grand State Exhibition is dedicated to historical and cultural relations in East-Central and Southeast Europe, the scene of wars and religious conflict in the heart of Europe throughout the 17th century. At the heart of the museum’s exhibits is the world-renowned Karlsruher Türkenbeute, a collection of trophies from the Turkish Wars of the17th century assembled by the margraves of Baden. It is more emblematic of Baden's history than almost any other collection, emphasizing its European dimension.
www.landesmuseum.de/en/museum/museum-in-the-palace/100-years-old

Top wines on the Badische Weinstrasse (Baden Wine Route)
From Heidelberg via Karlsruhe to the Swiss border, the Badische Weinstrasse (Baden Wine Route)inds through one of the top wine-growing regions in Europe, characterized by charming wine villages with rustic half-timbered houses and modern winery architecture. Visitors can observe winegrowers at work, directly experience the Baden lifestyle and cordiality at the numerous wine festivals, and of course indulge in the exquisite wines. A visit to the Staatsweingut Karlsruhe-Durlach should not be missed: the state winery cultivates its vines and produces its excellent red and white wines on the Turmberg, a foothill of the Black Forest. It is the only German region designated as a wine-growing zone B of the European Union, hence on a par with Alsace and Champagne. Connoisseurs expect higher quality grapes from this zone. And this is definitely the case on the Turmberg!
More information is available in the “Wine & Dine” brochure, specifically the suggested tour on pages 42 and 43 here.

On the trail of good cuisine in Karlsruhe
Both its location in the gourmet region of Baden-Württemberg and its proximity to France ensure that Karlsruhe is renowned not only for its wines but also for its numerous regional specialties such as “spätzle”. Rustic conviviality meets award-winning cuisine: there is something to suit all tastes and budgets. The many squares in the city center—such as Ludwigsplatz, the place to see and be seen—are surrounded by restaurants. From wine tavern to steakhouse to slow food restaurant: there’s a selection of culinary delights to tantalize every taste bud. And a vibrant nightlife awaits those who are not exhausted by nightfall. The trendy bars and clubs are populated by a diverse clientele including students, fashionable hipsters, and visitors from all over the world.
www.karlsruhe-erleben.de/en/culinary-delights

Tip: The popular culinary city tour is just the thing to get an overall impression of the delicacies on offer in Karlsruhe. More information is available here.

Step into the Middle Ages: The Karlsburg in Durlach
Visitors are inevitably fascinated by the medieval atmosphere of Karlsruhe’s Durlach district. The remains of a former lowland castle stand right in the middle of the small, picturesque old town of Durlach. Karlsburg Castle was converted into an early-Baroque stately palace complex when the residence of margrave Charles II relocated to Durlach in 1563. The extensive, multi-winged palace was situated within the old town walls, with its gardens laid out to the south of the palace at the time of its construction. Visitors can take the hop-on/hop-off bus from Karlsruhe to the old town of Durlach
www.karlsruhe-erleben.de/en/city-tour, www.karlsruhe-erleben.de/en/media/attractions/The-Durlach-District

About Karlsruhe
Karlsruhe lies in southwest Germany and is easy to reach: It only takes an hour to get there by high-speed train directly from Frankfurt International Airport. Situated adjacent to the mighty Rhine River and located at the northernmost corner of the Black Forest, the city is a perfect starting point for day trips to the Black Forest, France, and also Heidelberg. The climate is very pleasant – its location on the Rhine Plain makes Karlsruhe one of the sunniest and warmest cities in Germany. Founded by Margrave Charles William nearly 300 years ago, the city’s plan resembles that of Paris, with streets laid out in rays, like the ribs of a fan, radiating from a central point that is the margrave’s palace. The renowned 18th century city planner L’Enfant liked Karlsruhe’s design so much that he incorporated its elements into his plans for Washington, D.C.