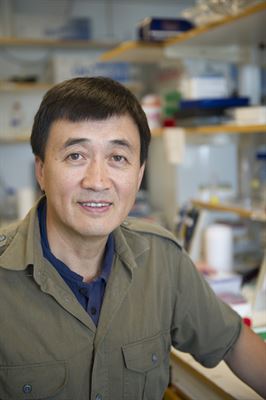 [PRESS RELEASE 5 January 2018] An international team of researchers led from Karolinska Institutet have, in experiments on mice, pinpointed a mechanism for the conversion of energy-storing white fat into energy-expending brown fat. The study is published in the Journal of Experimental Medicine.

Obesity is a major global health issue, affecting all age groups. Obesity increases the risk of several serious human diseases, including cardiovascular disease, type 2 diabetes and cancer. Despite this knowledge, effective drugs for the treatment of obesity and related metabolic disease are lacking.

Scientists differentiate between white adipose tissue, which constitutes most human fat and which stores surplus energy, and brown adipose tissue, which generates heat by consuming energy. One possible way of tackling potential obesity, suggest researchers, is to stimulate the conversion of parts of the white fat into brown.

In a new study conducted on obese mice, a research team led by Professor Yihai Cao Karolinska Institutet and their colleagues at the University of Connecticut and Qingdao University stimulated the formation of blood vessels in white adipose tissue by blocking the receptor molecule for a growth factor known as VEGFR1, an effect that was achieved in one group of mice by means of a drug, and on another through genetic modification. The result was an increase in the conversion of white fat to brown, as well as a reduction in obesity and improved sensitivity to insulin.

“Our discoveries can hopefully help us to develop new drugs for the treatment of obesity and diabetes,” says Yihai Cao, professor in vascular biology at the Department of Microbiology, Tumor and Cell Biology, Karolinska Institutet.