Koenigsegg has unveiled an all-new megacar – the Koenigsegg Jesko – at the 2019 Geneva International Motor Show. Jesko inherits the mantle left by the Agera RS as the leading track-focused, road-legal car for those looking for the ultimate in vehicle performance. 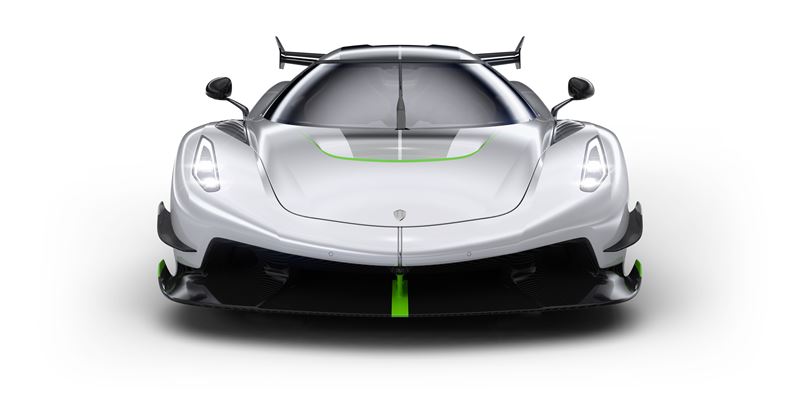 Jesko von Koenigsegg was a key presence at Koenigsegg Automotive during its formative years. His considerable business acumen helped steer the company through many early challenges. Now retired and in his 80’s, Jesko von Koenigsegg and his wife, Brita, were on-hand at the 2019 Geneva Motor Show to see his namesake vehicle introduced to the world. 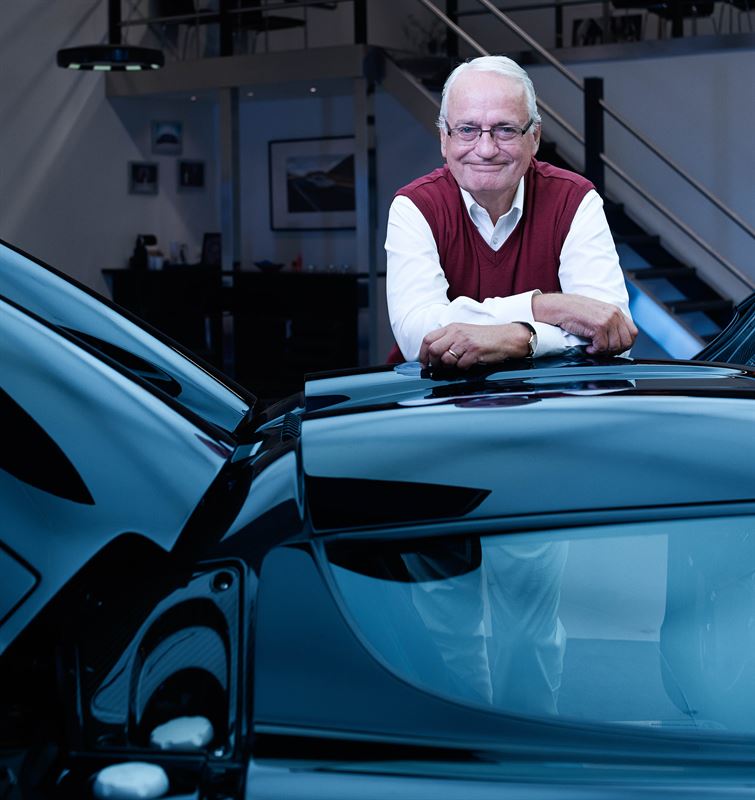 The crankshaft is milled by a small manufacturing house in southern Sweden. It is made to Koenigsegg’s in-house design from a single solid billet of high tensile Swedish Dievar steel. The flat-plane design allows even firing across engine banks and an even more visceral engine sound. The tendency of flat-plane engines towards greater vibration is countered by active engine mounts first used in the Regera, as well as newly designed, super-light connecting rods and pistons.

The Koenigsegg-designed air injection system comprises a small compressor and carbon fibre air tank. The patent-pending system provides a powerful 20-bar shot of air strategically located within the turbocharger system in order to pre-spool the turbochargers and provide instant response.

The engine has been re-designed to house a tumble valve on intake and individual pressure sensors for each cylinder in order to achieve real-time, precision monitoring of every cylinder - an industry first. Turbulent air provides a faster burn rate, which leads to more efficient and effective combustion, especially at lower rpm and during cold starts. 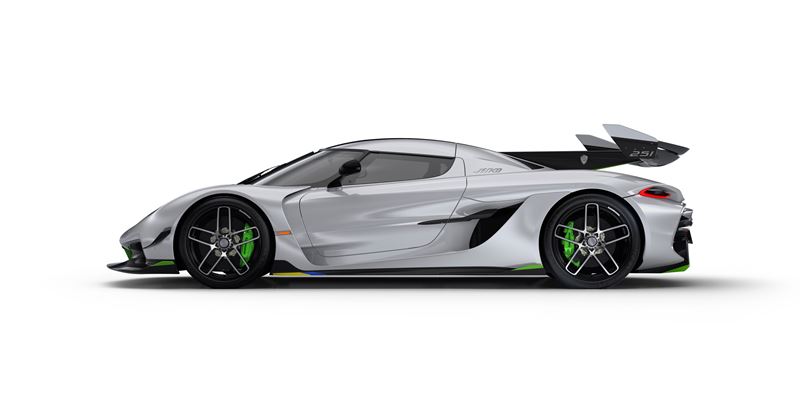 Jesko’s new Light Speed Transmission – designed in-house at Koenigsegg – is a 9-speed multi-clutch unit that does away with traditional synch rings and makes changes between ANY gear possible at near light speed.

Modern DCT’s typically have two clutches - one for even numbered gears and another for uneven numbered gears. One clutch/gear is engaged and driving while the control unit pre-selects what it anticipates is the next gear. This solution allows for fast gearchanges but comes with a significant weight penalty and the limitation of only changing to adjacent gears due to anticipation logic constraints.

The Koenigsegg LST allows the driver to change to the optimal gear for acceleration, regardless of that gear’s relationship to the current gear. We call this system Ultimate Power on Demand.

For example, if you are in 7th gear and 4th gear is the optimal gear for maximum acceleration, the Koenigsegg LST will allow you to shift directly from 7th to 4th at lightning speed, without waiting for synchronisation. In a traditional DCT, a driver would have to shift through 6th and 5th gears before getting into 4th, a loss of precious time and momentum.

Traditional DCTs can weigh up to 140kg. The new Koenigsegg Light Speed Transmission weighs just 90kgs, including wet clutches, flywheel, fluids, starter motor and oil pumps. It also has an optimized, compact design resulting in a much smaller footprint. This ensures the drivetrain’s weight is much more central to the vehicle, allowing more room for the advanced underfloor aerodynamics and the resulting lower yaw inertia for even more agile driving dynamics.

Gearshifts are via either steering wheel paddles or the manual-style shifter located in the traditional central position. Both the paddles and shifter feature a double-notch shifting mechanism. The first notch shifts one gear up or down. Advancing to the second notch engages Ultimate Power on Demand - shifting the car to the optimum gear for maximum acceleration, regardless of that gear’s relationship to the current gear - instantly. 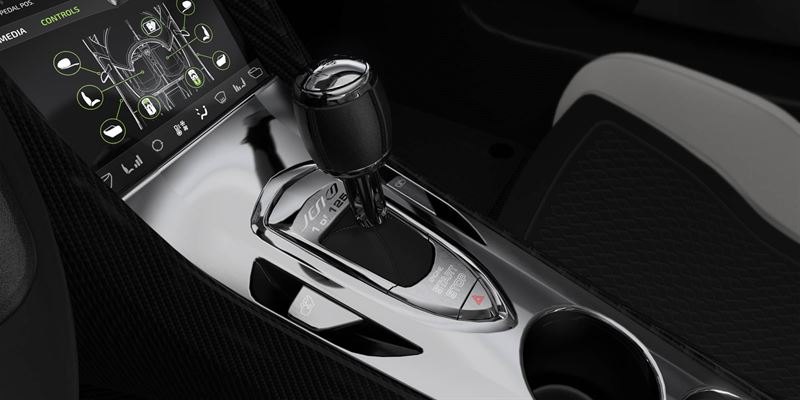 At the core of every Koenigsegg is its carbon fibre monocoque chassis. Jesko features a monocoque that is 40mm longer and 22mm taller than its predecessor, allowing for more generous headroom and legroom. Importantly, it still retains every bit of its structural rigidity, measured at 65,000 Nm per degree. This supremely stiff and strong chassis allows Koenigsegg’s engineers to concentrate on tuning the suspension for performance rather than compensating for suboptimal chassis dynamics.

Koenigsegg’s F1-style elongated wishbones are retained and improved. These combine with the largest wheel bearings used in a road car today to provide the ultimate in responsiveness and feel. Fully adjustable damping from Öhlins is tuned using bespoke electrics and controllers designed in-house at Koenigsegg.

Jesko redefines ‘precision’ thanks to an additional active Triplex damper added to the front suspension and a new rear-wheel steering system.

The Triplex system was first introduced in the Koenigsegg Agera in 2010. It used a third, horizontal damper built into the rear suspension to counter the car’s tendency to ‘squat’ during hard acceleration with over 1000hp.

As Jesko comes equipped with and aerodynamics package providing over 1000kg of downforce, an additional Triplex damper has been incorporated into the front suspension to maintain an optimal ride height during high aerodynamic load without compromising grip at lower speeds. Both the front and the rear triplex dampers now incorporate active bump and rebound damping.

Koenigsegg has equipped Jesko with an adaptive, active rear steering system that increases responsiveness and heightens the senses at both high and low speeds. Using inputs such as individual wheel speed, steering angle, steering wheel angular velocity, engine speed, lateral acceleration, longitudinal acceleration and other parameters, the steering system can turn the rear wheels up to three degrees in either direction for quicker cornering, increased agility and stability.

Jesko’s new optional carbon fibre wheels are the lightest and strongest production wheels of their size. Larger than the Agera RS wheels they replace, the front weighs just 5.9kg (20” x 9.5”) and the rear 7.4kg (21” x 12”). 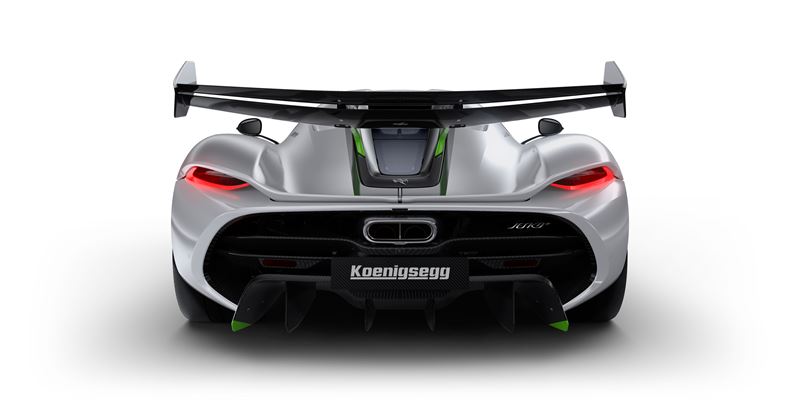 Showcasing its penchant for track-focused performance and handling, Jesko features the most aggressive aerodynamics package ever designed for a Koenigsegg car.

An enlarged, active double-profile rear wing hugs the rear form to maximise both the rearward positioning of the wing and the surface area used to push the car into the tarmac. The rear wing is top mounted to minimise disturbance on the underside - a focal point for high downforce.

The new Koenigsegg Jesko has been designed to deliver the highest measurable performance of any car homologated for road use for all world markets - the US, Europe, Asia-Pacific and the Middle East.

The record-shattering Agera RS and ‘Final’ editions were a fitting conclusion to the Agera model line. Like all Koenigseggs, they will be compelling cars for collectors and enthusiasts around the world for decades to come.

Jesko is a forward-facing tribute to the Agera line, the ultimate continuation of that legacy. It incorporates everything we learned in 8 years of Agera development and combines that with technologies designed for a new era of performance. It extracts even more power from the same size engine and with up to 1600hp available on E85 biofuel and a curb weight of 1420kg, Jesko has a potential power-to-weight ratio beyond 1:1 and the engineering hardware to match.

Jesko’s all-new exterior design pays tribute to Koenigseggs past but is unmistakably new, fresh and crisp. It’s also functional and practical, with up to 1000kg of downforce via its standard, fully adjustable aerodynamics package and Koenigsegg Autoskin - a robotized body with automated door and hood openings. Jesko has more legroom, headroom and interior visibility and despite the car’s focus on track performance, it retains every creature comfort.

Jesko inherits the Agera RS’s mantle as the ultimate road-legal megacar with a laser-like focus on optimal track performance. It ushers in a new era for Koenigsegg, extending the company’s legacy of futuristic innovation and scintillating performance. 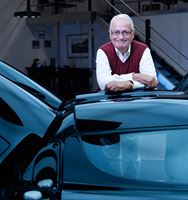 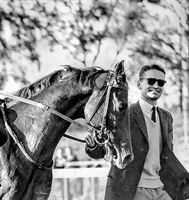