IFOTA revolutionizes update process with unprecedented speed and seamlessness
Koenigsegg Automobile AB, the globally renowned manufacturer of ultra-performance megacars and one of the most vertically integrated car companies for in-house-developed components and technologies, announced further technological advancements of the Koenigsegg-developed Firmware Over the Air (FOTA) system.

Koenigsegg’s current Firmware Over the Air (FOTA) system, introduced early in the Regera program 5 years ago, is a full-stack over-the-air system in which the firmware of the vehicle's control systems is updated to the core.  The next-generation Koenigsegg Instant Firmware Over The Air (IFOTA) update system will result in the smoothest and most seamless consumer-facing FOTA experience imaginable. Like the current FOTA system, IFOTA pushes remote upgrades to the firmware and software for almost all electrical nodes in the vehicle such as user interfaces, user experience, car dynamics, drivetrain HV components, and more. The Koenigsegg IFOTA system is revolutionary in that the software and firmware are downloaded in the background into special memory slots in the Koenigsegg node system. The user simply performs an update, and the system can then switch from the old dataset to the new in a few seconds, making all other known OTA or FOTA systems seem antiquated. 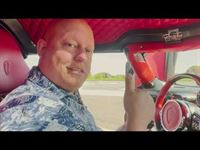 By developing and owning vehicle connectivity in this way, Koenigsegg can increase product quality and operational efficiency while also delivering post-sale vehicle performance and feature enhancements. To support this initiative, as well as future inhouse technological ambitions, Koenigsegg is currently expanding the team, and adding to its talent in software development.

IFOTA integration is expected for the Koenigsegg Regera program by the end of 2021.“Koenigsegg is no stranger to internalized development paths that go beyond industry standards to push the boundaries of innovation. Our aspiration is to deliver ultimate performance in every facet of every vehicle—and our FOTA systems are no different,” said Christian von Koenigsegg, CEO. “We are looking for bold visionaries who share our desire to push technological limits, with focus on sustainability.”

Founded in 1994 by Christian von Koenigsegg, Koenigsegg Automotive AB is a world leader in engineering and manufacturing of ultimate performance megacars and sustainable mobility technologies. Space age materials and uncompromising quality both in finish and function make these cars among the world's best. The company is based in Ängelholm in the south of Sweden and has some 400 employees.