The state-of-the-art SIC six-phase inverter is fully developed in-house for the upcoming Gemera and other future needs.

“As the inverter is smaller, lighter and more powerful than what we could find out there, we named it David, like in the story of David and Goliath,” says Koenigsegg’s Founder and CEO Christian von Koenigsegg. 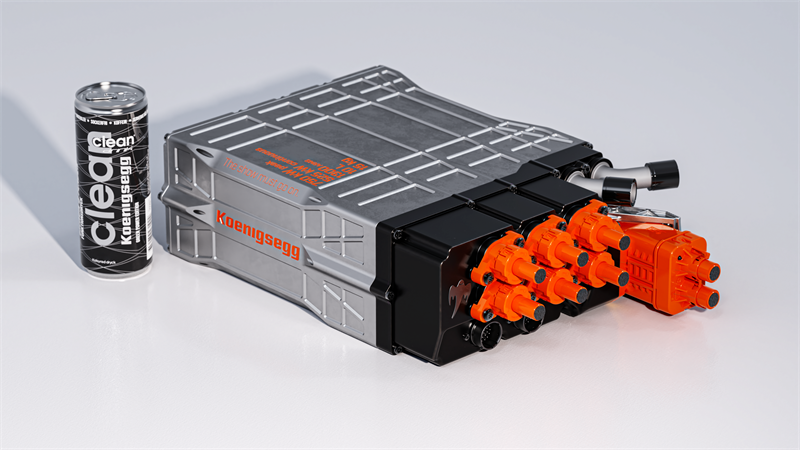 David runs on proprietary Koenigsegg flexible algorithms and software that is continuously upgraded over the Koenigsegg cloud via OTA. David is capable of either running two motors independently or one motor up to 750kW. Fully sealed housing and quick connectors allow safe connection without opening the casing or using special tooling.

David is a part of Koenigsegg’s ground-up, in-house developed complete HV architecture which includes, but is not limited to, E-motors, batteries and controllers.

Together with the to-be-disclosed Koenigsegg E-motors, battery and controllers, David is developed under the ISO 26262 regulatory framework and international high voltage safety standards. David is optimized for harsh automotive environments and designed to emit low electromagnetic emissions.

David also comes in versions directly busbar integrated with Koenigsegg E-motors, as an alternative to stand-alone integration via cable. Doing so will shrink David down to around 9 liters in volume.

As David and the other newly developed Koenigsegg HV components are aerospace-grade, there is also the possibility to use them for VTOL or other similar needs with further certification(s).

Christian von Koenigsegg adds, “I am very excited that our high voltage team can stay ahead of the curve in a very competitive E-mobility landscape in true Koenigsegg fashion”. He concludes, “I am also thrilled that we can offer this ground-breaking technology as components to visionary companies and entrepreneurs. Sharing these components enables Koenigsegg to have an impact on CO2 reduction. Stay tuned for more news in this area!”

Founded in 1994 by Christian von Koenigsegg, Koenigsegg Automotive AB is a world leader in engineering and manufacturing of ultimate performance megacars and sustainable mobility technologies. The company is based in Ängelholm in the south of Sweden and has some 500 employees. Read our story here: https://www.koenigsegg.com/koenigsegg-the-company/