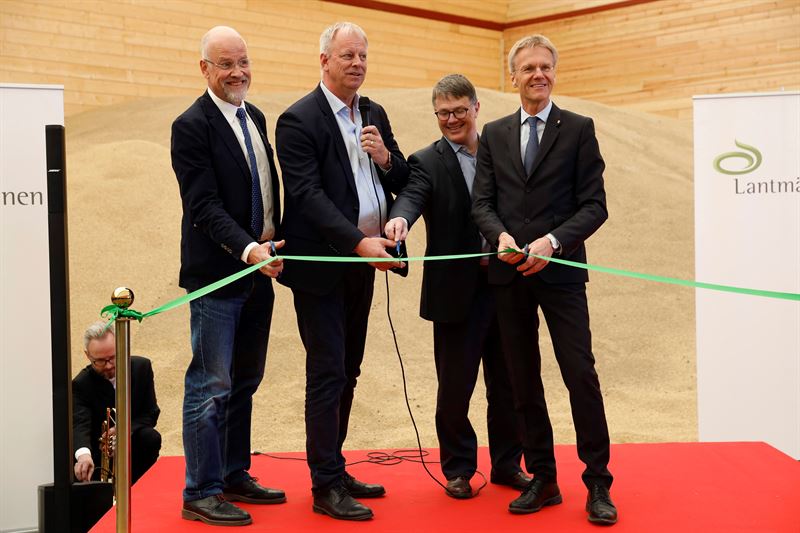 Lantmännen opened its new grain reception facility in Hargshamn Thursday May 16th and in connection with the official opening, received the first symbolic delivery of grain from a farm in nearby Gimo.

“This is a strategic long-term investment that will be able to significantly improve the further processing of grain cultivation in the northern area of Mälardalen. At Hargshamn, we have the opportunity to manage large volumes of grain efficiently, which will create a good platform for profitable grain cultivation and a stronger grain business over time,” says  Per Olof Nyman, Lantmännen CEO and Group President.

On average, Sweden exports 1,65 million tons of milling wheat, malting and feed barley, milling oats and rye per year. A high proportion of Swedish grain sold internationally is grown in the Mälardalen area.

“The port in Hargshamn will have the ability to load handysize vesselsu and will thus become one of Lantmännen’s most important export ports,” says Nyman.

The new reception facility will have a positive effect on farming in Uppland and is of significant importance for both Hargshamn and the Municipality of Östhammar as a whole. The project has been enabled thanks to a targeted approach and good cooperation in the region between the stakeholders

“Building a new facility of this size requires good cooperation and coordination between many different stakeholders. The involvement and commitment of both local politicians and elected representatives in Lantmännen’s Uppland district and representatives of the port have made it possible for us to reach our goal,” says Per Lindahl, Chair of the Lantmännen board.

About Lantmännen
Lantmännen is an agricultural cooperative and Northern Europe’s leader in agriculture, machinery, bioenergy and food products. Owned by 25,000 Swedish farmers, we have 10,000 employees, operations in over 20 countries and an annual turnover of SEK 45 billion (approximately EUR 4.5 billion). With grain at the heart of our operations, we refine arable land resources to make farming thrive. Some of our best-known food brands are AXA, Bonjour, Kungsörnen, GoGreen, Gooh, FINN CRISP, Schulstad and Vaasan. Our company is founded on the knowledge and values acquired through generations of farmers. With research, development and operations throughout the value chain, together we take responsibility from field to fork. For more information: lantmannen.com/en.