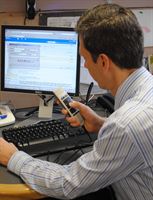 An audit that has pitched the performance of a digital dictation software platform directly against a traditional tape-based dictation system in a modern medical practice has revealed some startling improvements in efficiency and document turnaround times.Lexacom, a leading developer and supplier of digital dictation software in the UK, recently teamed up with the Appletree Medical Practice in Belper, Derbyshire to complete the audit. The time taken to perform certain operational tasks using both dictation platforms was recorded during the course of a month and the figures were then