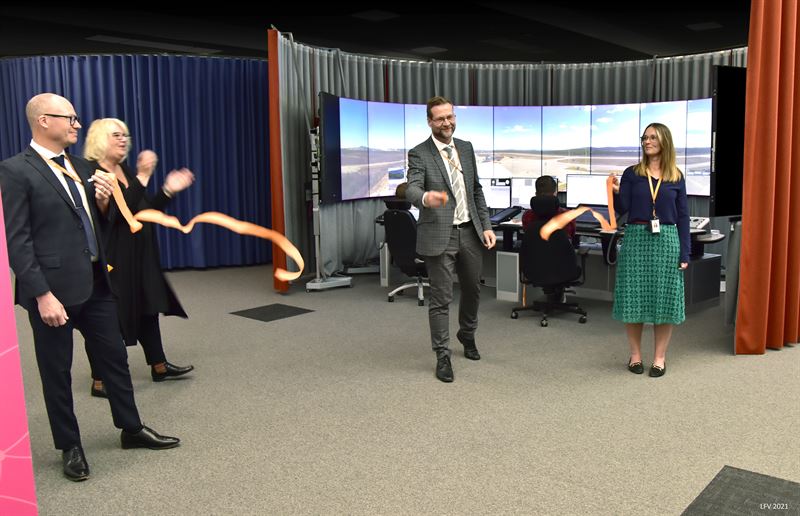 Today LFV commissioned the new remote tower centre, RTC Stockholm, for remote air-traffic control at some of Swedavia’s airports. The first airport to be connected to the centre was Kiruna Airport.

– We are proud and pleased to be able to open RTC Stockholm for remote air-traffic control today. This is the result of a close and productive collaboration with our client, Swedavia. The excellent cooperation we have enjoyed with the Swedish Transport Agency throughout the approval process has also been a key factor in the success of the venture, says LFV Director General Ann Persson Grivas.
– After many years of intensive work together with LFV Air Navigation Services of Sweden, we are now happy to take the first step towards remote tower services at our airports. The commissioning at Kiruna Airport is a milestone in Swedavia's strategy for digitization and innovation and the work of developing the airports of the future in line with our accessibility mission, says Jonas Abrahamsson, Chief executive officer at Swedavia.

RTC Stockholm is directly linked to ATCC Stockholm, LFV’s control centre at Arlanda and the centre of air-traffic control for large parts of Sweden. After the launch of remote air-traffic control at Kiruna Airport, three airports remain to be brought into the programme. According to the schedule, the programme is to be commissioned for all airports before year-end 2022.
– Remote air-traffic control enables us to offer the airports not only more flexible air-traffic control services but also more flexible hours of operation, says Ann Persson Grivas.
– We now have new opportunities for more efficient airport operations at the same time as we ensure important regional accessibility by ensuring redundancy and enabling flexible opening hours. We now look forward to a good collaboration in the continued work on commissioning at other airports, says Jonas Abrahamsson.

The project has received external funding from the EU.

LFV was first in the world to implement remote air-traffic control. In 2015, RTS was commissioned at Örnsköldsvik Airport from the RTC Sundsvall control centre. This was followed by Sundsvall Timrå Airport, Linköping City Airport and Scandinavian Mountains Airport in Sälen. Air traffic at these four airports is now controlled remotely from RTC Sundsvall by Saab Digital Air Traffic Solutions (SDATS). SDATS was formed jointly in 2016 by LFV and Saab to develop, market, sell and operate remote air-traffic control.

LFV is Sweden’s leading player in air-traffic service for civil and military aviation and associated services. We are a secure, robust and reliable supplier of air-traffic service in Swedish air space and at Swedish airports. Through various cooperations, we participate in optimizing the efficiency of the European air space and are a driving force for digitization in several areas.