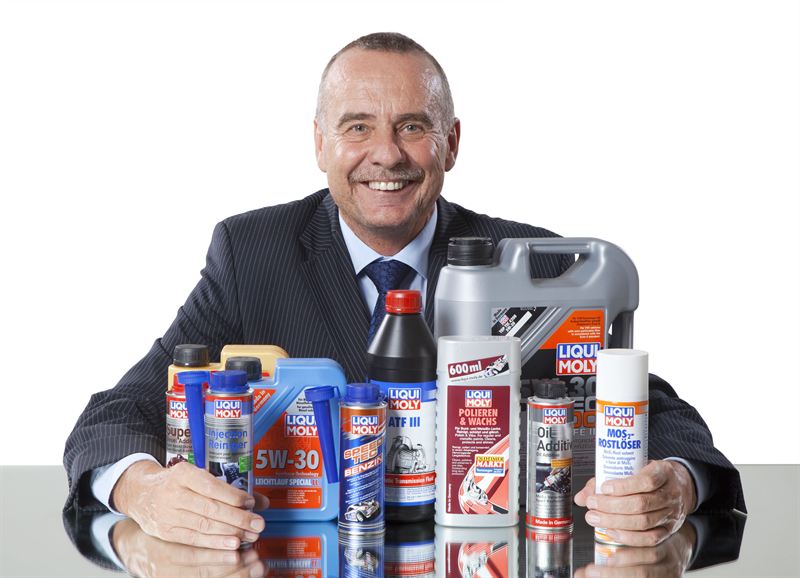 Oil and additive specialist closes 2016 with a sales record

February 2017 – LIQUI MOLY continues to grow. The German oil and additive manufacturer increased its sales by 11 per cent to EUR 489 million in 2016, setting a new record as in the years before. “As an SME, we’ve not only stood up to competition from the big multinationals, we’ve actually taken market shares away from them,” says Ernst Prost, managing partner of LIQUI MOLY.

In 2016 LIQUI MOLY produced almost 80,000 tons of lubricants and filled more than 14 million cans. The number of employees increased by 60 to a total of 791. "They’re the key to our success," says Ernst Prost. “You can only do what we’ve done with people who are motivated to move the company forward on a day-to-day basis.” The low illness figures and traditionally minimal rate of fluctuation are indicators of just how much staff identify with their employer – as well as the fact that many children of LIQUI MOLY staff go onto work for the company, too. Ernst Prost: “We’re more than just a family business. We’re the LIQUI MOLY family.”

A key factor in 2016 was the heavily fluctuating oil price, which doubled from January to December. “This doesn't make our business any easier,” says Ernst Prost. “That’s why our strategy is to pursue sustainable, qualitative growth rather than go for a short-term flash-in-the-pan in terms of sales figures.” Sales in Germany increased by 7 percent last year. This was more than expected: in its home market, LIQUI MOLY has a large and long-established share of the market that is difficult to expand.

The export situation was better, with sales increasing by 15 percent. This was mainly due to leaps in sales in key markets such as the USA (40 percent growth) and China (70 percent growth). And LIQUI MOLY brought off a turnaround in its biggest export market – Russia: sales there collapsed in 2015 due to the Crimea crisis, the weak ruble and economic decline. In 2016 figures recovered – in spite of the country’s ongoing economic problems.

LIQUI MOLY now generates two thirds of its revenue abroad – and the trend is upward, thanks to 51 employees in the export department. Ernst Prost: “Our Export Area Managers spend half their working hours on site with our customers, supporting them in implementing concepts and strategies. And our back office ensures that hundreds of containers are sent out all around the world every month.”

LIQUI MOLY also does very well in rather exotic countries such as Iraq, Algeria and Turkmenistan. While competitors tend not to invest much energy in these markets, LIQUI MOLY makes the most of the potential there (see also interview with Ernst Prost).

An extensive program of investment in the oil factory will be completed next year, but plans are already in place for the next multi-million purchases: LIQUI MOLY is working on introducing a new company software, and it is also planning to modernize and automate its production facilities. “Automation is necessary to be able to cope with the increasing demand and relieve our staff of physically very strenuous work,” says Ernst Prost. “And it won’t involve cutting a single job: as far as we’re concerned, people always come before machines.”

So all the indications are that growth will continue. 14 new staff have been hired since the start of the year, and sales in January were 16 percent up on the same month last year. Ernst Prost is optimistic: “We’ll crack the half-billion mark in 2017.”