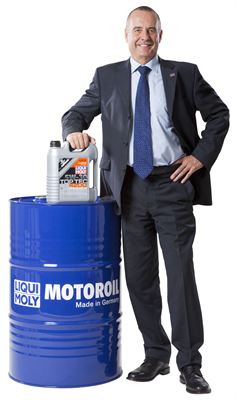 This result appropriately reflects what has been a highly successful year for the company. March and April 2016 already saw all-time monthly highs, with November setting a new sales record for the third time in the year. The figure of EUR 45.5 million is an increase of 20 percent over the previous month. The sales figure of EUR 453 million to date for 2016 is ten percent above that of the equivalent previous-year period and already more than the figure for the whole of 2015.

“Success and failure are not solely down to luck, it’s a question of people’s attitudes, too. The ability to work together and pursue a common goal is crucial. We demonstrated we are capable of this in November and in the previous months,” says LIQUI MOLY CEO Ernst Prost. “All of our 800 staff have been working full out ever since January. And in spite of the fast pace, we’re even managing to go that extra mile as the year draws to a close,” says Prost. “The company is truly flourishing and showing excellent growth.”

The development is impacting on workforce numbers, too. Almost 50 jobs were created at the company’s sites in Germany, while the team in the USA has virtually been doubled over the course of the year. And in the biggest export market of Russia, sales have been kept at a constant level despite the Ukraine crisis and a sharp drop in the ruble. There are strong indications of growth in the UK in spite of Brexit, and the workforce has been expanded there as well.

Prost says that another reason for the company’s success is the diversification of its product range beyond the automotive sector. Related business fields have been systematically penetrated: two years ago the range of motorcycle products was boosted significantly, for example, and the Marine line was launched this year. There are a variety of new products for construction machinery, and dedicated product lines even exist for vintage cars and aircraft. This knowledge transfer works so well because the fundamental technical requirements are very similar: combustion engines, lubrication, deposit removal, maintenance and protection from wear and tear.

As Ernst Prost says: “Ultimately, we’ve been very lucky with our business model, of course. There are combustion engines all over the world – and they all need lubrication. Cars and trucks are still increasing in number, so it’s hardly surprising we’re able to do business all round the world. And we’re certainly fortunate to be based in Germany, the home of the automotive industry. Our brand already has a positive aura, and ‘made in Germany’ does a lot to reinforce that. All our sales people have to do now is make sure that it's LIQUI MOLY oils that go into engines worldwide – and not products made by Shell, BP or Castrol.”

About LIQUI MOLY
With around 4,000 items, LIQUI MOLY offers a global, uniquely broad range of automotive chemicals: Motor oils and additives, greases and pastes, sprays and care care, glues and sealants. Founded in 1957, LIQUI MOLY develops and produces exclusively in Germany. There it is the undisputed market leader for additives and is repeatedly voted the best oil brand. The company led by owner Ernst Prost sells its products in more than 120 countries and generated 441m euros in sales over the past year.