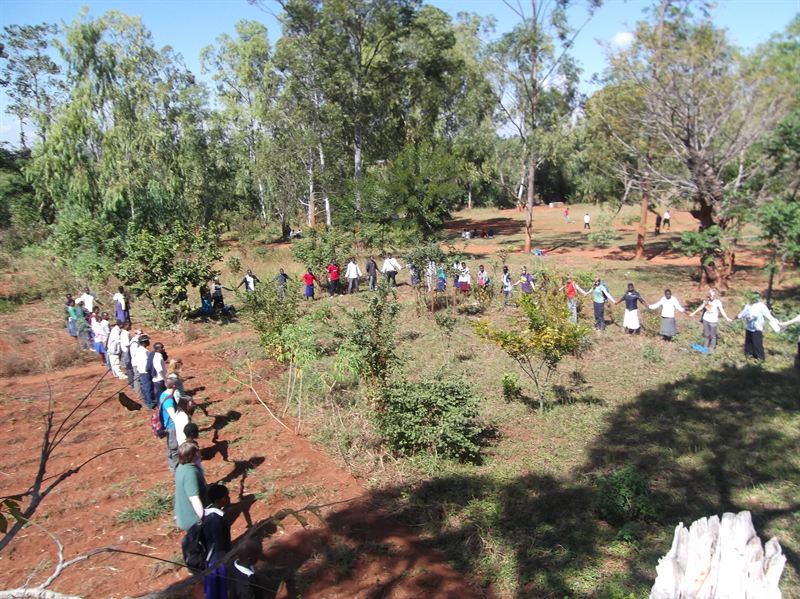 The first stage of a Scottish school’s ambitious plan to build a new hall for pupils in one of the world’s poorest countries will be completed this year after a £900 cash injection from a leading IT company.

The donation from Fujitsu’s Impact on Society (IOS) Scotland fund is the biggest received to date by the Fortrose Academy project to provide new facilities at the Mulanje Mission Community Day Secondary School in Malawi.

The academy has had a hands-on link with the African school since 2005. During this time there have been four trips by pupils and teachers from Fortrose to Mulanje to carry out important tasks, including HIV/AIDS peer education at the local youth club, conservation work on the spectacular Mount Mulanje and the planting of more than 100 rare Mulanje cedar trees.

Malawi is rated as one of the ten poorest countries in the world and its 12 million inhabitants have an average life expectancy of just 39 years.

The mission school is a rural secondary in the town of Mulanje in the south of Malawi close to the Mozambique border, near the cities of Zomba and Blantyre.

The new hall will provide a covered meeting place for assemblies, exams, drama/ music performances and social events for young people aged between 12 and 19. The school has no such facility at present and large meetings have to be held outside. Also, when exams are being held, many classes have to be taught outdoors.

The academy’s former rector Douglas Simpson contacted Fujitsu as a result of the partnership the firm developed with the school during the £66 million programme to upgrade The Highland Council’s office and school networks. Highland-based Fujitsu employees and their children have also been involved in the project.

Mr Simpson, who is a member of the fundraising committee of MUFOTO (Mulanje and Fortrose Together and one of the team that has visited Malawi several times, said: “We greatly appreciate Fujitsu’s generous contribution of £900 to our fundraising efforts.

“It’s the biggest donation we’ve had so far and will go a long way to helping us reach our target of £30,000.”

The cash boost was also welcomed by Councillor Dr David Alston, who repesents the Black Isle on The Highland Council. He said: “I am delighted at this donation by Fujitsu, which will enable young people at Fortrose Academy both to help young people in Malawi and learn from the experience of developing such a major project.

“When The Highland Council enters into large contracts, such as the purchase of ICT services from Fujitsu, we expect to see some form of community benefit. In this case, Fujitsu’s contribution is making a real difference not only in the Highlands but in one of the world’s poorest countries.”

Alastair Millar, Fujitsu Service Manager on The Highland Council project and chairman of the IOS fund, said the Malawi development is an inspirational and rewarding project

“It is encouraging to see young people involved in helping others in such a practical way that will have huge benefits for many years to come”, he said. “We are delighted that our contribution will help the work get started.”

Fujitsu UK & Ireland implements its charitable support and community relations policy via locally organised Impact on Society groups. The company is committed to playing an active role in developing relationships and working with the community in the areas of education, health, IT literacy and social welfare to encourage and support local initiatives for mutual benefit.

Community engagement can take the form of financial support for charitable or not-for-profit community organisations, sponsorship and employee volunteering.

Alastair Millar, the contact for the Impact on Society group in Scotland, can be contacted at alastair.millar@uk.fujitsu.com

Lucid answers four questions for clients: what to say, who to, when to say it, and how? We link our PR, Marketing and Business advice to client growth strategies. We believe our work should help you where it matters the most - on the bottom line.