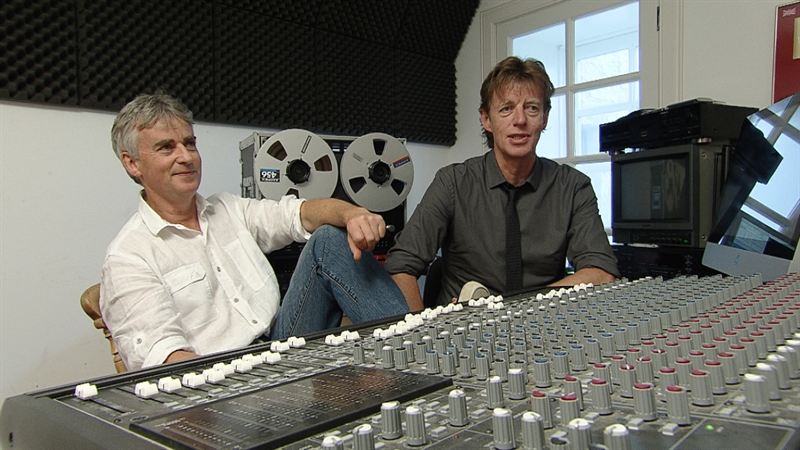 A film following the making of the first solo project of Runrig brothers Rory and Calum Macdonald is to be screened on Christmas Day.

The Band From Rockall, was inspired by the rock‘n’roll music from America and Merseyside the pair listened to while growing up in the Highlands and Islands in the 1960s.

The intervening decades saw Rory and Calum write and literally shelve many of their compositions as they devoted their efforts to Runrig, the band they helped create and become a national and international phenomenon.

However, over the past two years, and especially the last 12 months when the band took a break from touring, the brothers revisited their early work and wrote fresh material for their own album which was released on Ridge Records in April to critical acclaim.

A documentary telling the story of the two-year labour of love will be shown at 8.05 p.m.on BBC ALBA on Christmas Day.

“It was a joy to do the documentary”, said Calum. “The way we approached it was just like writing another song, albeit a much longer one.”

The title of the album comes from the rock outcrop which lies in the Atlantic Ocean, 300 miles west of the Scottish mainland and 200 miles beyond St Kilda and the Outer Hebrides and the last landfall before America.

The concept even pre-dates Runrig, which was formed in 1973, but the band’s subsequent success meant there was never time to develop it further.

“It was something we wanted to do for a while, but just didn’t have the time to fit it in”, said Rory. “But the band’s break gave us the opportunity and it’s been a fantastic experience.

“We have always wanted to look back over our old songs to see if we might find something and we did. There were hundreds of pieces to consider and while it took a bit of time it was very rewarding and brought back a lot of memories.

“When it’s just the two of you decision making is a lot easier. We just took our time and did things at our own pace without a deadline. The result is a record of two halves with older songs mixed with some new compositions.”

The Band from Rockall features 12 songs, six of which have been plucked from their previously un-released back catalogue, while the others were specially written for the project. Four are in Gaelic, reflecting the brothers’ cultural background.

The documentary follows the pair as they take a musical journey back through their previous work, some of it long forgotten – Rory preferring to listen on the original reel-to-reel tapes while Calum favours digital format – and writing the new material. One melody sits without lyrics until they are inspired to compose Am Bard Deireannach (The Last Bard), a eulogy about the last-of-a-generation family relative, whale fisher and village poet whose death they learn about in the local paper during recording.

The brothers talk, in both Gaelic and English, about their influences, from Duane Eddy and Hank Marvin to The Beatles, The Searchers and Gene Vincent, and about the style of music with which they grew up.

Filming in the familiar landscapes throughout the Highlands and North Uist, is interspersed with footage of Rory and Calum performing their songs in their home studios, in Denmark, London and at the Rocket Science studio in Glasgow.

Rory plays all guitars and most of the keyboards and Calum plays drums on the album, with his son Donald,also a songwriter and performer, playing guitar. Joining them are Michael Bannister and Ross Hamilton, the owners and engineer /musician/producers from Rocket Science; Andy Thorburn (piano): Euan Burton (double bass): Ryan Quigley (trumpet): Paul Towndrow (saxophone): Fiona   Johnston (strings) and B. J. Cole (pedal steel guitar).

The project ended in time for the brothers to rehearse for the latest Runrig tour in December before starting planning events for the band’s 40th anniversary in 2013.

Calum added: “We are delighted we have finally finished the album and the documentary and feel very satisfied with how it all turned out. It was a project that meant a great deal to us.”

Lucid answers four questions for clients: what to say, who to, when to say it, and how? We link our PR, Marketing and Business advice to client growth strategies. We believe our work should help you where it matters the most - on the bottom line.