About LutherCountry: Where you can walk in Luther’s footsteps Would you like to step inside the very room in which Martin Luther translated the New Testament into German, or admire the pulpits from which he preached and where pastors still preach today? Do you want to taste beer brewed the way Martin Luther liked it? Then come and visit LutherCountry, where you can explore Luther’s old stomping grounds and much more! LutherCountry is situated in the heart of Germany and has so much to offer, from fascinating churches and museums for the believers and history or culture fans among you, to beautiful landscapes that could be straight out of a children’s picture book. What do the places in LutherCountry all have in common? Centuries ago, they were the stage for Martin Luther’s tumultuous life and thus played a special role in the Reformation, which changed the way people thought about so many aspects of daily life. Martin Luther’s influence spread through Western Europe and, with European settlers, to the United States. Although Luther lived more than five centuries ago, his presence is still tangible today. Grab your suitcase and come experience the unforgettable –LutherCountry is waiting to be discovered!

On cobbled squares surrounded by half-timbered houses, LutherCountry’s Christmas markets  are picture perfect. Think choirs singing carols and the scent of gingerbread and mulled wine. Christmas trees are everywhere. After all, it was Martin Luther , who “invented” the Christmas tree on Christmas Eve, 1536. He cut down a fir tree, set it up indoors and decorated it with real candles! He even composed the first Christmas carol: “

July 2nd: The day that Martin Luther was thunder struck

Martin Luther: A flash of inspiration?On July 2, 1505, a thunderstorm in Germany changed the course of history. As Martin Luther was returning from his family’s home in Mansfeld,  to Erfurt , where he was studying law, he was caught in a storm in the hamlet of Stotternheim. Thunder rumbled; lightning nearly struck him . Luther begged St. Anne

LutherCountryIn 2019 and 2020, pilgrims are heading for Germany. Religious pilgrims are retracing the roots of Protestantism in LutherCountry ; cultural pilgrims are traveling to BauhausLand  for this year’s centenary celebrations of the Bauhaus Movement. Next year, travelers are combining two experiences: Luther’s heritage  and Oberammergau’s unique Passion Play  that takes place only every 10 years. After 2017’s

Learn about the man behind the name“How do we know what Martin Luther  looked like?” “Where did he go to school?” “What did he eat for dinner?” These are just some of the questions that tour guides in LutherCountry  have fielded in the past few months. The 2017 celebrations marking the 500th anniversary of the Reformation have renewed interest in Luther, the German monk, who changed world history. And the full story lies in the German federal states of Thuringia and Saxony-Anhalt, just south of 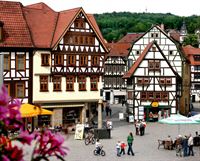 What Martin Luther would recognize todayReformation Day on October 31st is a good time to think about “then” and “now”. In the region, where Luther lived and worked, for example, what would look familiar to the Great Reformer?  Astonishingly, the answer is: “Lots!” LutherCountry , the German federal states of Thuringia and Saxony-Anhalt, still has much that Luther would recognize. And it is easy to find, from medieval houses along Germany’s Half-Timbered Houses Route to cultural treasures, such as castles and gardens. But this part of Germany offers more

A free journey to Germany awaits the ideal "tester"Taking a close look at a map of Europe is like studying the site plan of a huge history theme park, with exhibits that tell the stories of the earliest periods of western culture. They trace the origin and journey of a great idea and showcase astonishing architecture. Quite a few revolutionary ideas are presented in the German section of this theme park called “Europe”, one of the foremost ones being the Protestant Reformation. This special section – LutherCountry – will open its doors to one chosen “tester” and their travel companion

Travelling back in time in LutherCountry Want to travel back 500 years? In Lutherstadt Wittenberg , stand in the middle of the enormous Asisi Panorama , the circular painting depicting medieval street life. It looks so real, you can almost smell the food, hear the church bells and eavesdrop on gossip. Even shaking hands with Martin Luther and his friends seems a possibility! But there are many more

LutherCountry awaits visitors in 2018 with more events and smaller crowds"One American visitor dropped to her knees when she stepped into the room, where Martin Luther  translated the New Testament in 1522. She was moved to tears.” That stone-walled cell in Wartburg Castle is just one place, where visitors can still walk in the Great Reformer’s footsteps. Although the 500th anniversary of the Reformation made 2017 a jubilee year, it was just the start of commemorations for major events that Lutherans will mark for years to come.

From Martin Luther's influence on Christmas traditions to atmospheric Christmas Markets A Christmas tree, special carols and presents on December 24th: these much-loved traditions are all linked to Martin Luther . Start with the tree. While walking through snowy woods under a bright starlit sky, the beauty of the scene so moved Luther that he wanted to recreate it at home. So, he cut down a fresh tree, brought it inside and decorated it with real candles. Or so the story goes. What is known is that The Great Reformer

Steps towards the Reformation The clock is counting down to a momentous occasion, as Lutherans on every continent prepare for October 31st, the 500th anniversary of the Reformation. Thousands have already made the pilgrimage to LutherCountry , about 125 miles southwest of Berlin. Thousands more will visit the German federal states of Saxony-Anhalt and Thuringia for that special date. As well appreciating the past, this anniversary marks a fresh beginning. By walking in the Great Reformer’s footsteps

Imagine sausages grilling over charcoal: even the thought is mouth-watering. In LutherCountry , that appetizing smell wafts across cobbled squares in towns and cities. But these are not just any sausages. They are Thüringer Rostbratwurst, the same Thuringian sausages that Martin Luther loved. In the year celebrating the 500th anniversary of the Reformation, Luther’s favorite foods and beverages  are still part of daily life in what are now the German federal states of Saxony-

A time to worship, a time to celebrate

Reformation Summer in LutherCountry Joyous celebrations and solemn services, lively festivals and thought-provoking exhibitions: all are on offer this year, during Reformation Summer in LutherCountry . No wonder visitors from around the world are heading for the German Federal states of Saxony-Anhalt and Thuringia, where they can walk in the footsteps of Martin Luther . What better way to commemorate the 500th anniversary of the Reformation than to see where the Great Reformer grew up,

In St. Andrew's Church in Lutherstadt Eisleben , you can almost hear Martin Luther panting as he climbs up to give his last sermon. That was in 1546, but the pulpit is still used today. Few historical lives can be followed so closely as the Great Reformer’s. And, as Lutherans commemorate the 500th anniversary of Martin Luther’s history-changing protest, it is easy to follow in his footsteps in LutherCountry , the German federal states of Saxony-Anhalt and Thuringia.

On January 16, the nation observes the birthday of Martin Luther King, Jr. Just as he is honored for his leadership in the civil rights movement, so he is also remembered for his inspiring “I have a dream speech” in Washington D.C. But not everyone knows why a boy named Michael King Jr became Martin Luther King Jr. It all goes back to King’s father, a minister, who visited Germany in 1934. So moved was he by the message of Martin Luther  that he changed his, and also his son’s, names. The boy became the activist,

Supporters of Martin Luther and the Reformation

NEW: LUTHERCOUNTRY IS NOW ON INSTAGRAM You can now view those one-of-a-kind inspirational Instagram photos and videos at visit_luthercountry . Find out more about LutherCountry by contacting people that are there or have been there. Then add your own memorable moments when YOU visit!   MEET: MARTIN LUTHER'S FRIENDS AND FAMILY When the world celebrates the 500th anniversary of the Reformation next year, one man takes the headlines: Martin Luther. But the Great Reformer would be the first to acknowledge that he could

Opening of the Reformation Anniversary Year: October 31, 2016 After five centuries, the Protestant Reformation celebrates its 500th birthday in 2017. The past Luther Decade has built up both spiritual and secular awareness of Martin Luther’s history-changing protest. Reformation Day on October 31, 2016 marks the start of the year-long jubilee, with celebrations both solemn and joyous. The world is invited to see special exhibitions, to listen to concerts, to take part in moving services and to join in animated discussions. So, in 2017, come and visit LutherCountry, the German