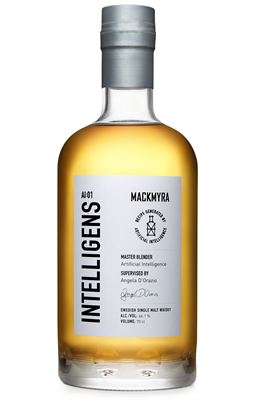 Intelligens, the world’s first whisky created using artificial intelligence (AI), will be launched on 3 September. The whisky has been created by the award-winning Swedish whisky distillery Mackmyra, which is celebrating its 20th anniversary, based on the Microsoft Azure platform. The development has taken place in collaboration with the Finnish technology company Fourkind.

Intelligens is a Swedish single malt whisky with a golden colour and a taste of vanilla, oak tones, citrus and pear, which has been created using artificial intelligence, with Mackmyra’s Master Blender Angela D’Orazio acting as a mentor.

“It’s very exciting that our whisky created using AI is now finally available for purchase. There is huge interest in it, and it will be interesting to hear what both whisky drinkers and technology fans think about the taste,” says Angela D'Orazio, Master Blender at Mackmyra.

Intelligens is the result of a collaboration between Mackmyra and Fourkind, and is based on the Microsoft Azure platform. Mackmyra provided Fourkind with its 75 whisky recipes, which have been compiled over the years with the help of Mackmyra’s ambassadors, and supplemented this information with customer feedback, reviews, ratings, medals, evaluations and ratings. Using this as the raw data, Fourkind built an AI model that generates new recipe suggestions.

“Algorithms don’t have minds, so we need a new approach in order to understand something as complicated as whisky. Even though they lack human expertise, we can teach machines to understand which elements make up past recipes and products, and how these are perceived and ranked by customers and experts,” says Jarno Kartela, Principal Machine Learning Partner, Fourkind.

Intelligence can be bought from Mackmyra’s British online shop, at mackmyra.co.uk.

Intelligence is also equipped with NFC tags from Mackmyra’s partner Thin Film Electronics. If a smartphone equipped with an NFC-scanner is held against the bottle, more detailed information about the whisky and its production is provided.

Mackmyra is a Nordic whisky making pioneer that kickstarted the Swedish whisky journey in 1999. Its whisky is created with Swedish raw materials, without additives, and using environmentally-friendly distillation technology. In addition to its award-winning whiskys, craft distilled gin has also been available since 2017 via another distillery, Mackmyra Lab Distillery.