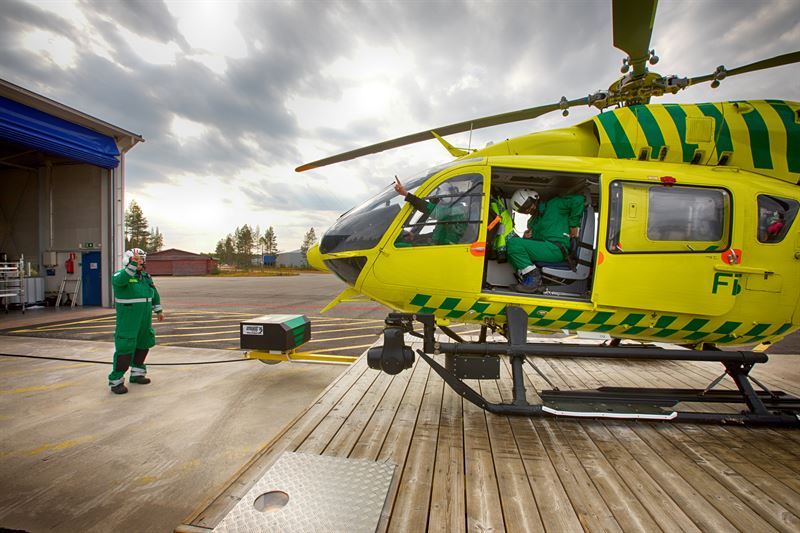 The emergency operations and location accuracy of FinnHEMS’ medical and emergency helicopters become more efficient. The Rovaniemi-based software company Mapitare Oy has tailormade a real-time system for authorities, which enables faster responses to accidents. The system operates on Android and iOS devices.

FinnHEMS has six bases in Finland, the northern-most one is in Rovaniemi and the southern-most one is in Vantaa. The aim is to ensure that 70 percent of Finns’ emergency calls would be responded to within 30 minutes of dispatch. Mapitare’s system allows even more accurate and faster responses to the exact location.

Mapitare is based on reliable and accurate mapping technology, which has been comprehensively tested in Finland, Sweden and Norway. The map material is downloaded to the phone’s memory, and it operates even with weak phone and data connections.

Lead paramedic Tero Karvinen from FinnHEMS 51 in Rovaniemi started his career in the medical helicopter at the time when location was still based on paper maps and a compass.

According to Karvinen, Mapitare is the most functional system so far, and it includes all the information required in the helicopters. Flight safety has increased, particularly in poor conditions and low flight altitudes.

- Tall masts, power lines and electricity lines are alerted on the screen of the terminal device or phone upon approach. The map software also indicates landing sites, parking sites and resting sites, which are known to have also been cleared from snow during the winter.

The software has been developed and tested for FinnHEMS’ needs.

- In cooperation with mapping system experts, it was easy to create a tool, which is exactly what we need in the helicopter. The map software is in the memory of terminal devices and business phones, so it does not require an internet connection and does not crash during use. In addition, the accuracy of the terrain maps is finally sufficient for us.

Tero Karvinen says that this information is utilised on a daily basis in the medical and emergency helicopters, when staff plans flight routes and landing locations. The software plans the best possible route to the correct address.

The Emergency Response Centre dispatches Rovaniemi’s FinnHEMS units on average five times a day and more than 1,800 times per year.  In most cases, a medical helicopter encounters a patient due to a stroke, chest pain or breathing difficulties.

- Perhaps the best aspect of the new system is that we can see all the other emergency care, rescue service and voluntary sector units on the map as real-time moving units. If rescue services are waiting for us to land, we can see where the unit is coming from.

- In terrain rescue operations, such as in case of snowmobile or quadbike accidents, we can see where rescue services are. We can also utilise, for example, the assistance of Lapland Safaris’ guides in our operations.

When Mapitare’s mapping software has been downloaded on the phones and terminal devices of the entire staff, damage to one device or a flat battery during a rescue operation will not cause problems.

- In addition, if staff occasionally splits up, location data is always certain. Sometimes a paramedic may join the emergency response unit as an escort and the helicopter will return to Rovaniemi, Tero Karvinen states.

Not yet in use in neighbouring countries

Mapitare’s maps also reach beyond the Finnish borders to Sweden and Norway. In its entirety the data covers all of the land and sea areas of Finland, Sweden and Norway. The basis for the map is source materials from authorities and the content is updated regularly.

With its operations, FinnHEMS cooperates with both countries, where e.g. the police and rescue services do not yet have access to similar software.

- The fact that the mapping materials exist is an advantage to us even when we take patients to e.g. Tromssa in Norway, says Tero Karvinen.

The company has over 15 years of experience in operational systems. As a result of five years of development, a new mapping technology and reliable service model (tested) have been created.  The map has no scale limit, and items are presented with production precision (cm).

Mapitare software has no dependencies on other suppliers. As a result, 100% change management can be done in a cost-effective way. The software products can be used in all systems and network connections are not needed for their use.  Being independent of the environment and hardware guarantees a long life cycle for the technology.