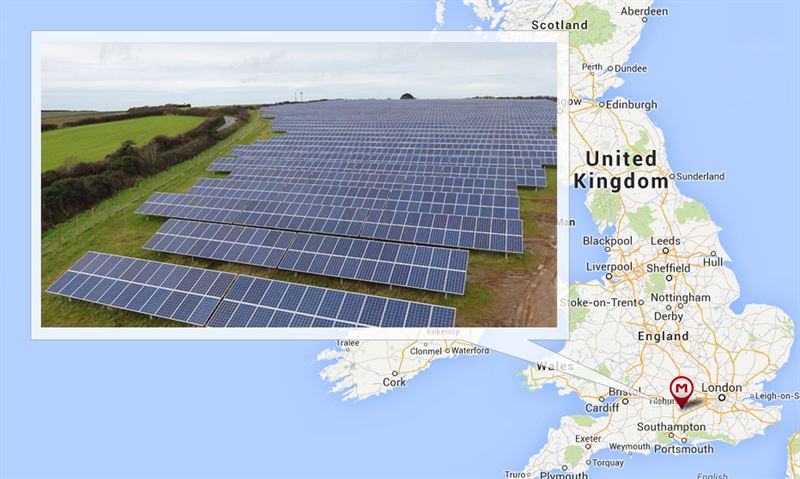 − The delivery of this 78.4 MWp cluster strengthens the established partnership between Martifer Solar and Lightsource Renewable Energy, the UK’s largest solar energy generator

− The 78.4 MWp portfolio is the largest utility-scale project being constructed to date in the UK

Martifer Solar, a subsidiary of Martifer SGPS, is building a 78.4 MWp portfolio of photovoltaic plants in the United Kingdom. The utility-scale combined capacity consists of five plants, which are located in the counties of Cambridgeshire, Devon, Nottingham and Swindon.

Following the successful completion of the first round of the previously announced 50 MW in development, Martifer Solar has sold one of these projects located at Spittleborough Farm and entered into an EPC agreement with Lightsource Renewable Energy to construct four additional projects, which aggregate the 78.4 MWp cluster. All five PV plants will be added to the Lightsource asset management portfolio in the UK and Martifer Solar will be retained under an operation and maintenance (O&M) contract to ensure the optimal performance of the plants.

“We are proud to continually enforce our commitment to the development of solar energy in the UK, and with a strong partner in Lightsource Renewable Energy, Martifer Solar has emerged as a leading global player in this market,” said João Cunha, Country Manager of Martifer Solar in the United Kingdom. “We have been very active developers in the UK market and are looking forward to a continued healthy pipeline of utility-scale projects in development to be ready to build throughout 2014 and early 2015.”

Kareen Boutonnat, Managing Director for Lightsource Renewable Energy stated, “With the largest development pipeline in the UK, we have to ensure we build on relationships with our trusted EPCs like Martifer Solar who already have significant experience developing and constructing solar farms in the UK. This local knowledge is vital in ensuring our solar farms are constructed to a high standard and in a responsible nature, respecting the local communities.”

With project capacities between 9 MW and 24.67 MW, their combined capacity results in the largest portfolio being built to date in the UK. The five PV plants consist of 308,418 modules in total installed in ground-mounted fixed structures, across a total area of about 155 hectares. The total portfolio of plants will generate around 69.05 GWh of clean energy each year. The plants will produce equivalent energy to supply the average consumption of 38,815 inhabitants and will offset the emission of approximately 31,582 tons of CO2 annually.

“This achievement of delivering the largest project in the UK expresses our consistency and leading role in the PV market,” said Henrique Rodrigues, CEO of Martifer Solar. ”Revenues wise, 2013 was one of our best years and 2014 is forecasted to be even stronger for Martifer Solar, with further milestones anticipated across the world due to our proven capabilities as a fully-integrated player in key markets, such as in the UK.”

Martifer Solar has been present in the UK market since 2011. According to recent research from NPD Solarbuzz, the large-scale ground-mount segment was the key factor in the UK’s ability to reach 1.45 GW installed PV capacity in 2013, which in turn led to its ranking as the sixth largest country for large-scale solar.

With a growing ground-mount solar PV pipeline which currently tops 5GW, the UK is set to become the largest solar market in Europe for the first time during the quarter of 2014.

Martifer Solar is a fully-integrated player in the global photovoltaic market focused on Development, EPC and O&M Service.

In 2012, Martifer Solar’s revenues reached 230.8 million euros and, to date, the company has implemented 480 MW of photovoltaic solar energy worldwide.

Lightsource Renewable Energy Limited is the UK’s largest generator of solar energy. Lightsource develops, operates and maintains the largest portfolio of utility scale solar PV plants in the country with a total of 220 MW closed and funded to date. Lightsource is UK based with a growing team of over 100 experienced solar engineers, planners and project managers.

Founded in 2010, the company has made rapid progress over the past two years, establishing itself as the pre-eminent player in the UK Solar PV sector.

Free educational resources on solar power and climate change are available to download from the Lightsource website.