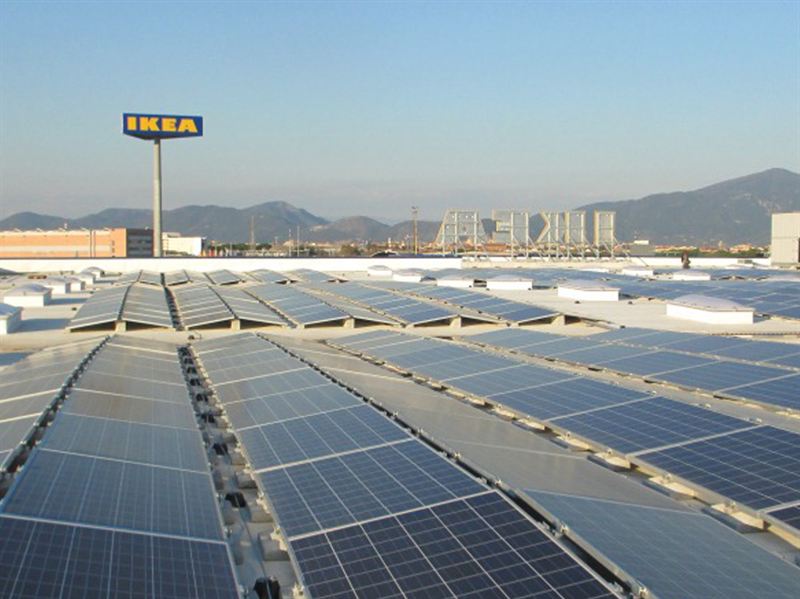 Martifer Solar, a subsidiary of Martifer SGPS, has delivered one of the first unsubsidized solar power plants in Italy for the Ikea Group on the rooftop of a new commercial store in Pisa, Tuscany. The project has a total capacity of 696.15 kWp and has been structured without a feed-in-tariff approach.

This realization is a breakthrough in terms of a solar PV business model because it provides Italy with the possibility to build a stable solar industry without the reliance on government incentives. The power generation from this PV project will be at a Levelized Cost of Electricity (LCoE), which is equal to or less than the price of electricity being sold from the grid.

“As a future-oriented company, Martifer Solar achieved a historical milestone with this project completed together with IKEA Group. This achievement means that solar energy is as cost-competitive as any other energy source in Italy and principally, without subsidies. The solar industry is approaching grid parity in an increasing number of places worldwide,” says Henrique Rodrigues, CEO of Martifer Solar.

Martifer Solar was responsible for the EPC (engineering, procurement and construction) of this 696.15 kWp plant and will be responsible for the subsequent Operation and Maintenance (O&M) service. The grid parity project, with approximately 2,700 modules installed on fixed structures, will produce the equivalent amount of electricity for nearly 800 inhabitants and will avoid 373 tons of CO2 emissions per year.

“The partnership with Martifer Solar has enriched us with new experience making us a company oriented to solar PV business. The installation of Pisa is the largest of our stores in Italy and the first polycrystalline technology for Ikea. Another step forward to create a better daily life for many people," says Ferdinando Ricco, Technical Installation Manager of IKEA Italia Property S.r.l.

According to Valerio Senatore, General Manager of Martifer Solar in Italy, “This is a solid proof that grid parity in Italy is now a reality and we are proud to move toward this new market concept. Moreover, we are honored to have reached this important goal cooperating with one of the most recognized industrial groups worldwide.”

Analysts at the Deutsche Bank predicted in a 2013 report that markets such as Italy and India would see a transition from feed-in-tariffs to “sustainable” markets with a surge in grid parity projects within a year.

Martifer Solar has been present in Italy since February 2008. According to latest iHS research report among 700 EPC contractors, Martifer Solar was appointed as the 5th largest player at the European level and 16th in the World’s PV integrators ranking.

Martifer Solar is a fully-integrated player in the global photovoltaic market focused on Development, EPC and O&M Service.

In 2013, Martifer Solar’s revenues reached 274.7 million euros and, to date, the company has implemented more than 500 MW of photovoltaic solar energy worldwide.