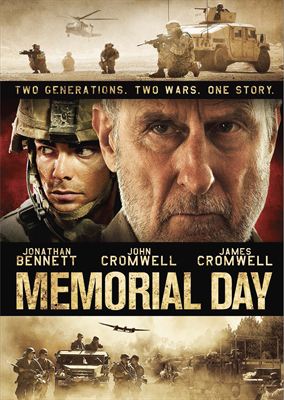 MINNEAPOLIS, Minn. (April 17, 2012) -- MEMORIAL DAY is poised to be a favorite during the film festival season after a positive reception by what could be considered its most critical audience: active-duty soldiers. The filmmakers of MEMORIAL DAY (previously titled SOUVENIRS) received a standing ovation from the Minnesota National Guard 34th Red Bull Infantry Division at Camp Ripley following an advance screening of the film that depicts units of the Guard, and included 39 active-duty soldiers.

“The advance screening at Camp Ripley was a small way to say thank-you to the soldiers who helped inspire and inform this film, many of whom we had the honor of working alongside during weeks of shooting,” said MEMORIAL DAY director, Sam Fischer. “We worked very hard to ensure the authenticity of the film, but I was overwhelmed with gratitude when the soldiers at Camp Ripley gave us a standing ovation after they saw the movie. That’s the best critical review any director could ask for.”

An original screenplay by Marc Conklin, MEMORIAL DAY is about a 13-year-old boy who discovers his grandfather's (James Cromwell / THE ARTIST, BABE) World War II footlocker and strikes a deal with him: He can pick any three objects inside, and Grandpa will tell him the stories behind each one. The boy ends up joining the Minnesota National Guard 34th Infantry “Red Bulls” Division and experiencing friendships, losses and moral dilemmas that parallel his grandfather’s.

MEMORIAL DAY will be released on Blu-ray, DVD, and digital download the week of Memorial Day.

For more information, or to view the trailer, please visit www.memorialdayfilm.com.