TRAVELSTAR EUROPEAN EXPECTS TO SAVE THOUSANDS AS ONE OF THE FIRST TO FIT MICHELIN 295/80 R 22.5 X MULTIWAY 3D TYRES 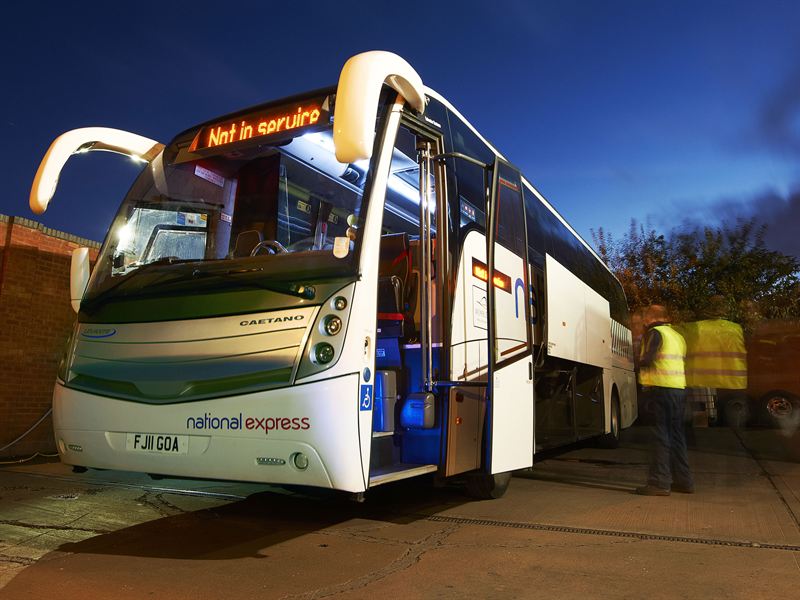 The company has implemented a programme to replace all existing tyres across its fleet, as wear dictates, and says the projected savings will come from increased tyre life over its previous brand, the elimination of uneven tread wear and improved fuel economy – after a Michelin Technical Manager assessed its vehicles and operation in detail and then calculated revised tyre inflation pressures.

Working in the evening, to avoid any costly downtime for the customer’s fleet, Michelin conducted a detailed tyre inspection and vehicle weighing exercise which found numerous vehicles to be running tyres displaying abnormal wear. In order to optimise tyre performance, Michelin Technical Manager Steve Jones suggested an increase in tyre inflation pressures by some 15 per cent. According to Michelin, this optimisation of inflation pressures can increase tyre life by up to 19 per cent. Similarly, inflation pressures impact on vehicle handling characteristics and the previously lower pressures would have increased tyre rolling resistance; thereby using more fuel.

Jones explains: “At Michelin we offer added value service. When an operator buys a Michelin tyre he or she has invested in a premium product but they don’t just get the tyre for that investment, they get a highly-trained Account Manager and also access to a Technical Manager such as myself.”

Asan Fazal, a Director at Travelstar, says: “I was quite surprised with the pressures Michelin recommended at first, but we made the changes after seeing the irregular tyre wear we were experiencing.  We are already noticing a positive change in tyre performance; the Michelin guys have been absolutely fantastic.”

For Fazal, another motivating factor for switching to the X MultiWay 3D was the tyre’s M+S and 3PMSF* markings which mean that the tyre provides excellent grip and traction in winter conditions.

“With the X MultiWay 3D we can run them all year round, put them on all the coaches, enjoy multiple benefits, and we get the peace of mind knowing we are fitting the best tyres on the market, too,” Fazal says. “It’s a win-win situation.”

Previously, Travelstar European was giving away its worn tyre casings to the supplying dealer. Fazal says he has never been a believer in remoulded tyres because, in his experience, they have “only been another bit of rubber put onto an old casing.”

But with Michelin, Fazal is interested in trialling the company’s Four Lives policy, where the tyres are re-grooved, then comprehensively re-manufactured into Michelin Remix tyres, and then re-grooved again.

The new tyre deal will be serviced through ATS Euromaster, so on the rare occasion a vehicle suffers tyre-related breakdown, the company has swift access to Europe-wide 24/7 roadside rapid response.

Both Travelstar European and Michelin plan to actively audit the savings made by the switch to fitting Michelin tyres.

*3PMSF stands for ‘3 peaks mountain snow flake’.  Tyres with this marking have reached a minimum level of performance in winter conditions, proven by a standardised test conducted on snow which is soon to be adopted into an ECE Regulation.  M+S can be declared by the tyre manufacturer, without the need for reaching a minimum standard.  M+S is not winter specific as it covers performance in mud as well.