Vienna Beef, the food company synonymous with Chicago-style hot dogs, is teaming up Chicago Bears legend Mike Ditka to introduce a new line of dinner sausages available throughout Chicagoland and in select restaurants around the country by August 9th.

The Ditka Sausages, measuring eight inches in length and weighing one-third of a pound, will be offered in two flavors: Hot Beef Polish Sausage and Chicken Sausage with Mozzarella and Sun-Dried Tomatoes.  The sausages are the first super-premium, co-branded item in the dinner sausage category, an area which saw an increase of 4.2% in 2012, according to Nielsen surveys, based on national unit volume over the last year.

Made by Chicago-based Vienna Beef, the Ditka Hot Beef Polish Sausage is infused with a special blend of pure beef, cayenne peppers and zesty seasonings, before being hardwood hickory smoked. The Chicken Sausage is filled with premium chicken, fresh mozzarella cheese, sun-dried tomatoes and spiced with basil and garlic.

The huge, eight-inch, one-third pound sausages were made with hometown tradition in mind. “These sausages embody Chicago. The tradition, the teams, the fans, the big appetites— Chicago deserves a monster sausage they can be proud of,” said Coach Ditka. “I think I’m going to go have one right now.”

Packaged for retail, the sausages are available at Chicagoland area Jewel-Osco and Mariano’s locations, as well as numerous independent grocery and convenience stores.  Both flavors come in a 10.66-ounce two-pack, with a suggested retail price from $4.99 to $5.99.  The products are also available as a food service item, in a five-pound case containing 15 sausages, and will be served at various prominent restaurants and sports venues, including Ditka Restaurants, Gold Coast Dogs, America’s Dogs, Mickey’s Hot Dogs, Soldier Field, Arlington Racecourse, Vienna Beef’s Factory Store and a number of independent golf courses, hot dog stands and sporting venues across Chicagoland.  Additionally, the product can be ordered online at www.ViennaBeef.com, is offered in the nearly 100 Old Chicago Pizza & Taproom locations nationwide, and available at Woodman’s Markets throughout Illinois and Wisconsin.

“Ditka. Sausages. Talk about a match made in heaven,” said Timothy O’Brien, co-president of Vienna Beef.  “Vienna Beef is thrilled to team up with the Ditka Brand to bring together two Chicago icons for one unique, larger-than-life product— just like Coach.

“The natural pairing of the two brands has created the ultimate, super-premium quality sausage to fill the stomachs of sausage enthusiasts and Chicago-sports fans alike,” continued O’Brien.

Mike Ditka played as a Hall of Fame tight end for Chicago Bears in the 1960’s, and his most notable football accomplishment was as the team’s Head Coach during the 1985 season, when he led the Bears to victory in Super Bowl XX. Ditka is currently a football analyst for ESPN. The Ditka Brand also currently includes premium cigars, wines, meats and restaurants.

For more information on Vienna Beef’s premium food products, including Ditka Sausages, their locations or any of their brands, please visit www.ViennaBeef.com or follow on twitter @ViennaBeef and @DitkaSausages. 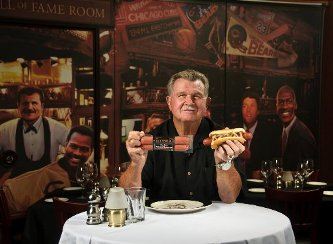