myFC and ABB initiates a collaboration with ABB’s new YuMi robot technology. YuMi robots will produce the PowerCards for myFC’s new fuel cell charger, JAQ, and with this collaboration, myFC will build their first factory in Sweden. 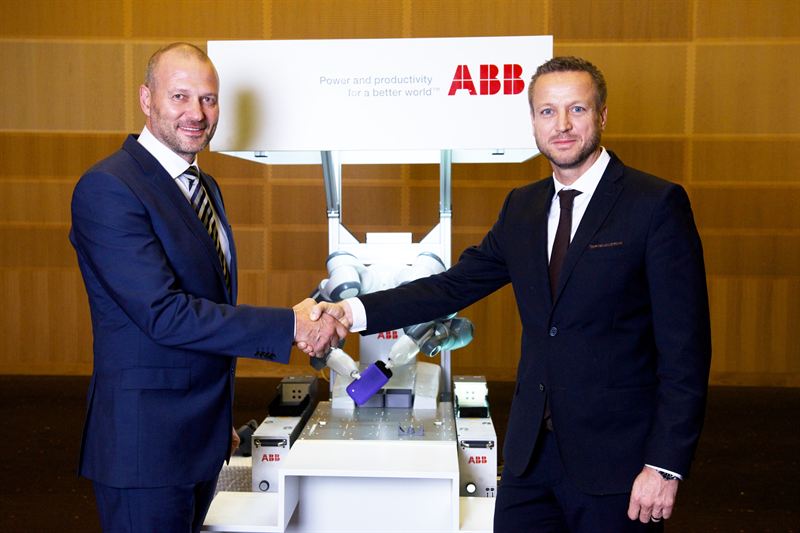 myFC’s JAQ is the world’s smallest charger which uses environmentally friendly fuel cell technology to generate electricity instantly for smartphones and tablets. JAQ helps users to charge their batteries without depending on an electrical socket. The slim PowerCard introduces a completely new way to charge, since the card and charger can easily fit in a pocket or a purse and can be used anywhere, whenever it is needed. The electricity is instantly generated when the charger activates the card.

The robots from ABB will initially make production tests and the assembly for JAQ’s charging cards, which contain water and salt to generate green energy together with the fuel cell.

“We are very glad to be part of enabling myFC’s work in setting up an innovative and effective production of their PowerCard. YuMi’s outstanding features for collaborative small part assembly makes a perfect match with myFC’s need of a robot that provides ease of use and a robot that can work closely with humans on the same assembly tasks”, says Dennis Helfridson, Robotics Local Business Unit Manager in Sweden, ABB.

“The reason we are now initiating cooperation with ABB and the new YuMi robots is so that we can control the whole fuel production while at the same time become location independent. This is why we are placing the first production facility in Sweden so that we can make sure that the whole assembly and production is 100% green using only renewable energy. With YuMi, we can be extremely flexible with a variable volume and produce closer to our customers in Europe, the USA, and Asia – or anywhere where we can have a completely green, controllable, and high quality-environment for production. The automation also means that we bring down the production cost for the card, which is an important parameter to consider. For a telecom operator, it means more flexibility when producing cards with designed messages for different occasions, for example, large events where the telco operator wants to promote themselves in a new way,” concludes Björn Westerholm, CEO of myFC.

About myFC
myFC is a Swedish innovation company that develops energy solutions using fuel cell technology. The company has launched two portable fuel cell chargers for small electronics like cell phones, cameras and tablets. Fuel cells use environmentally friendly technology that enables instant charging from a depleted battery state without ever needing a wall charge. myFC was founded in 2005, has its head office in Stockholm and was listed on the NASDAQ OMX First North in May 2014. The company’s Certified Advisor is Remium Nordic AB. To find out more, please visit www.myfcpower.com