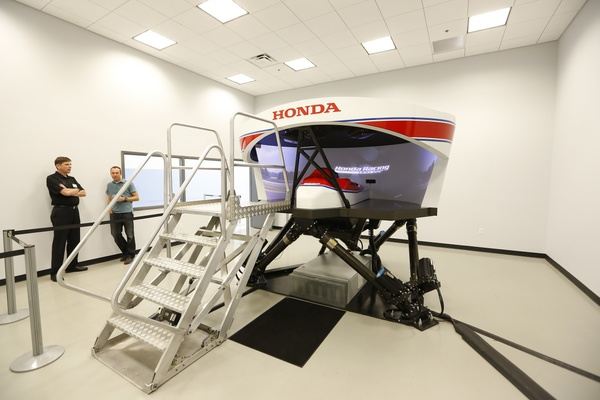 Following the introduction last year of enhancements to the company’s ePhyse external physics package, which allowed new levels of motion-cueing customization on its simulators, Cruden is now showcasing its own interpretation of the interface. Adding vehicle side-slip angle and dynamic varying yaw pole to existing motion cues overcomes the limits of traditional acceleration cues and is particularly useful in providing realistic feel of oversteer and understeer.

“There are limits to how well a motion based simulator can cue acceleration on the longitudinal and lateral direction because the available space is used quickly and the feeling cannot be sustained. We understand that some vehicle dynamics teams, particularly in professional motorsport, need more,” explains Edwin de Vries, senior vehicle dynamics engineer at Cruden.

“Our novel cueing method imposes the vehicle’s side slip angle – a signal that fits, unmodified, within the motion space – on the platform’s yaw angle to avoid washout- and high pass cueing filters,  enriching the driver’s handling perception.

“We can show a reduction of the latency of platform motion with respect to simulated vehicle; the yaw response is more crisp than with the traditional cueing,” says de Vries.

With the new ePhyse add-on, Cruden’s customers are able to bypass the standard cueing algorithms and command direct platform set points from within the Simulink environment; the motion base software continues to manage the system’s inverse kinematics, workspace and safety aspects. This opens up opportunities for advanced cueing techniques like model predictive control or prepositioning.

Cruden is the world’s leading designer and manufacturer of professional, interactive, motion-based racing simulators. The company develops the most high tech, realistic and accurate professional equipment for the top levels of international motorsport, including Formula 1, as well as vehicle manufacturers and their suppliers. The same package is then made available to the global attractions market and to private individuals to create a motorsport experience which simply does not compare with ‘games’ machines on the market. Cruden’s heritage is in the development of professional simulators for the aerospace, marine and automotive industries. Originating from Fokker Aircraft Company, the company was FCS Racing Simulation before becoming Cruden in 2006. www.cruden.com