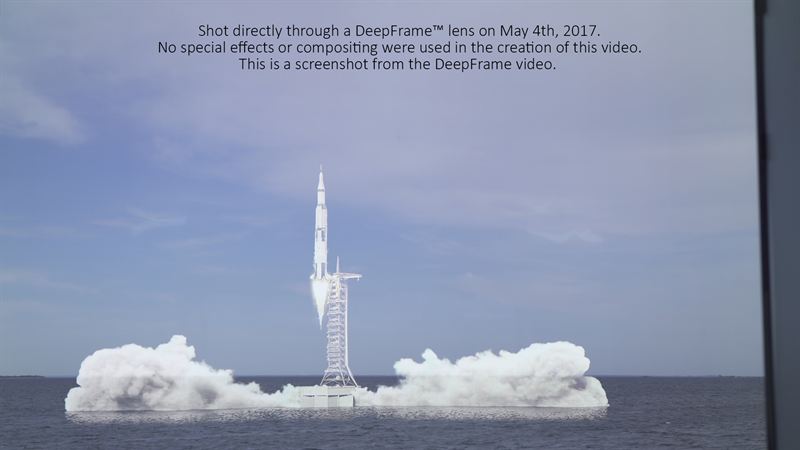 Realfiction, an innovator and frontrunner in mixed reality solutions, today announces its ground-breaking display DeepFrame. DeepFrame is the largest display of its kind to convincingly mix physical reality with lifelike digital 3D animations completely without the use of glasses providing viewers with jaw-dropping effects that realistically interact with the environment seen through the lens.

Copenhagen, 18 May 2017: The new breakthrough patent-pending display technology was recently unveiled to a small audience in a surprise demonstration at the national aquarium in Copenhagen, Denmark. Here the new display showed a realistic 3D rocket launch taking place about two kilometres out on the water. A video crew captured the reaction from the spectators stunned by the realistic and unexpected lift-off taking place in front of their eyes, highlighting DeepFrame’s future potential.

“Since 2008, we have been working on mixed-reality solutions that makes it possible for several viewers to share the same visual 3D experience embedded in the real physical world without the use of glasses. With DeepFrame, we have finally solved this challenge making it possible to erase the line between fiction and reality. Now you could potentially be seeing a lifelike 3D version of King Kong climbing the building across from your office window,” says Peter Simonsen, Co-founder and R&D Director, Realfiction.

The breakthrough technology behind DeepFrame enables large-scale 3D visuals looking like holograms in 4K resolution seen through what looks like a window-frame. Unlike other mixed-reality solutions currently under development by other companies, DeepFrame does not require spectators to wear any glasses or other eyewear to view the true-to-life animations. This makes it possible to create visuals that are integrated directly in to everyday social situations, where several people can share the same experience as a social event.

Realfiction is a Danish company that have been working with companies such as Louis Vuitton, Tag Heuer and Samsung in the mixed-reality space since 2008, where display technology adds an extra digital layer to the world in real time, thereby enhancing reality. The market for mixed-reality solutions is estimated to reach a yearly revenue of USD 80 billion in 2025, according to research by Goldman Sachs Group, Inc.

The DeepFrame series of large mixed-reality screens offer many applications that apply to a broad range of industries. For example, the displays are expected to be used in theme parks, retail spaces, exhibitions, construction projects and in the foreseeable future also consumer products.

“We are very excited to announce DeepFrame and expect to offer it commercially for companies that want to create extraordinary viewing experiences from August on. This technology enables companies in nearly any industry to present new content and real-life experiences to their audiences, and in the very near future, we also expect it to become a popular technology in consumer products,” says Clas Dyrholm, CEO, Realfiction.

Realfiction’s existing display solution, Dreamoc, has already been a large success in the retail and exhibition space, but is limited by its form factor. With DeepFrame size is no longer an issue, as the displays can reproduce visuals of virtually any size such as a new bridge, a car, a rebuilt castle ruin or a real-size visualisation of a spaceship hovering above the city skyline.

DeepFrame is based on a combination of well-known technologies, refined through high technical quality and precision in the production phase. The image from a curved video screen is deflected and enlarged in a custom-made glass optic. This glass optic, in its current form of 64 inches (115x115cm) is perceived as a clear transparent window. The other side of the window shows the reality you are in, combined with the projection of the image from the video screen. Because the glass optics also greatly magnify the image, a screen of just 65 inches, can create a projected animation that covers an area of ​​several square miles.

The patent pending technology is developed by Realfiction. The manufacturing process of the optics is as complex as making lenses for deep space telescopes. Realfiction’s products are sold through an international network of B2B partners.

1– Link to the video of the 3D rocket launch at the national aquarium here: https://youtu.be/ShfGydxB5D8

2– Link to the report from Goldman Sachs: http://www.goldmansachs.com/our-thinking/pages/technology-driving-innovation-folder/virtual-and-augmented-reality/report.pdf

Link to all future information about the product DeepFrame: https://www.realfiction.com/solutions/mixed-reality/deepframe

Founded in Denmark in 2008, Realfiction is a market innovator within mixed-reality solutions, a market estimated to reach USD 80 billion in 2025. Realfiction’s first product, Dreamoc, has since its launch sold over 10.000 units, and the company is now launching its new patent-pending technology DeepFrame, a series of ground-breaking large format mixed-reality screens. DeepFrame offers a wealth of new applications for companies across industries such as entertainment, manufacturing and retail, as well as a broad range of future consumer products.