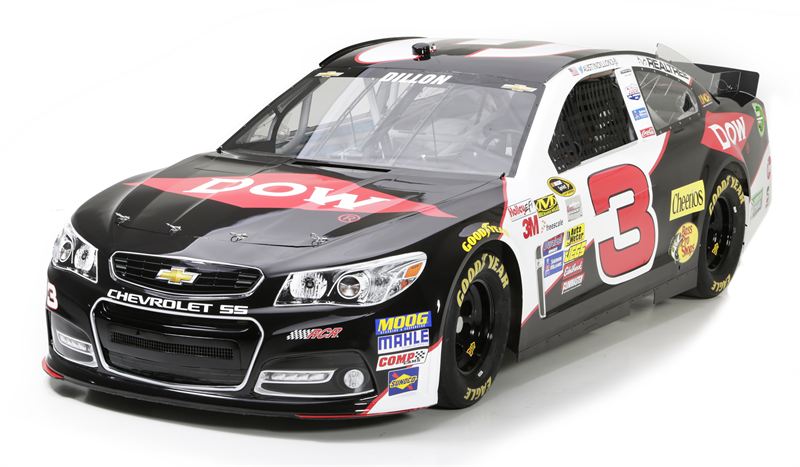 Richard Childress Racing (RCR) is kicking off the 2015 NASCAR season on Feb. 14 in the Sprint Unlimited at Daytona International Speedway with new race car wraps and a high level of confidence. The team nearly pulled off a spectacular championship in the 2014 season, with star driver Ryan Newman finishing 2nd by less than one second in the season finale at Homestead-Miami Speedway. RCR hopes to build on that momentum and tally some big wins in 2015. Although the team’s hot new wraps aren’t likely to create wins on the track; the bold, vibrant graphics are sure to capture the attention of fans worldwide and please RCR’s corporate sponsors.

While team sponsors remain the same, the RCR graphics crew has been hard at work designing, printing and installing newly-designed wraps for the fleet of race cars, including those driven by stars Newman (No. 31 Caterpillar/Quicken Loans/Wix Filters Chevrolet), Paul Menard (No. 27 Menards Chevrolet) and Richard Childress’s grandson, Austin Dillon (No. 3 Dow/Cheerios Chevrolet). This year, another one of Richard Childress’s grandsons, Ty Dillon, will be making his first Sprint Cup Series start at the Daytona 500 driving the Cheerios No. 3 car.

“When it comes to new wrap concepts, we may need to create up to 20 different variations of a single design for a sponsor to choose from,” said Nick Woodward, RCR’s graphics manager. “Regardless of whether a design is new or not, we print and install a new wrap for every one of our race cars prior to each race. During the course of an average season, we’ll complete approximately 325 full vehicle wraps, using more than 99,000 square feet of media to produce the prints.”

According to Woodward, his crew focuses primarily on design work from August through late fall, while the demanding wrap production and installation requirements keep the graphics technicians equally busy throughout the racing season. RCR relies on a total of eight Roland wide-format digital inkjets, including a state-of-the-art SOLJET Pro 4 XR-640 printer/cutter and Pro 4 XF-640 printer, to produce the detailed, eye-catching wraps needed for each car. In addition to wrapping its race cars, the graphics team wraps RCR’s support and transport vehicles, as well as some of the equipment used in the pit. All of the work takes place at a dedicated 2,500 square-foot graphics facility at RCR’s expansive Welcome, North Carolina campus.

Woodward is quick to point out how important high quality graphics are to RCR’s overall operation. “Our sponsors make significant investments to promote their respective brands to NASCAR’s huge audience,” he noted. “Our wraps play a major role in that overall promotional plan, so each one needs to be perfect. The Roland printers we use are not only fast, they’re also incredibly reliable and precise. That allows us to complete all of our jobs on time, and get everything from the corporate colors to the smallest details of the logo just right.”