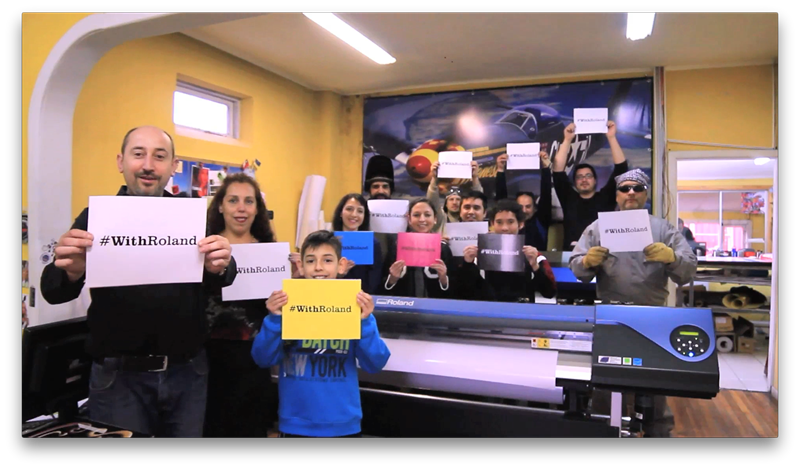 Roland DGA has announced the Grand Prize winner of its month-long “With Roland” video contest, which gave North and South American Roland users the opportunity to win valuable prizes by sharing their success stories through creative five- to 60-second videos. Roland’s judging panel named Luis Soto, of T & S Ltda. in Punta Arenas, Chile, the Grand Prize winner, based on the enthusiasm, creativity and execution quality demonstrated in his video. Soto won a Roland product of his choice from a selection of 16 new Roland devices and decided upon a VersaUV® LEF-12 flatbed UV printer, valued at $19,995.

“We were so excited to hear the news that Roland selected us as the Grand Prize winners, we all began crying with joy,” said Soto. “Since we already have one VersaUV LEF-12 and are thoroughly impressed by its performance, we decided to opt for another as our prize. Our LEF allows us to create unique, high quality promotional products for several large corporations in our area of Chile. Having a second one will enable us to double our production capability.”

Jorge Enrique Rodriguez Campos, of Arauca, Colombia-based Circle Inversiones S.A.S., won the With Roland “People’s Choice” prize, an award based on the votes of those who viewed the video entries at the contest’s gallery web page. Campos’s prize consists of two free passes to Roland DGA’s imagiNATION 2016 inkjet user conference, which will take place April 20, 2016 in Orlando, Florida at the Orange County Convention Center.

In addition to the Grand Prize and People Choice awards, weekly “Participation” prize winners were selected at random during the contest period. Those four prize winners, Chris Arthur of Sign EFX, Trace George of VSP Marketing Graphic Group, Danyell Butler of Dynamic Art LLC, and Rich Senff of Action Sports, will each receive a $500 credit for use at the Roland DGA online store.

“The ‘With Roland’ contest served as the perfect platform for our users to showcase their creative talents and share with the world how Roland products have helped their businesses succeed,” said Roland DGA’s President, Rick Scrimger. “We congratulate our prize winners, and thank all the users that entered our contest for telling their stories in such unique and compelling ways. The fact is, they are all winners, and Roland is proud to have played a key role in their growth and success.”

To view all the videos entered in the With Roland contest, including the prize-winning entries mentioned above, visit http://www.rolanddga.com/promo/2015/withroland.