Head into battle with Angry Birds Epic – out now worldwide!

Rovio’s epic role-playing game set to take over the world across multiple platforms.

Espoo, Finland -- June 12th 2014 -- Today marks the global launch of Angry Birds Epic, Rovio’s first role-playing game featuring the iconic Angry Birds characters as legendary heroes. In this epic adventure, players get to explore a fantasy version of Piggy Island full of mysterious caves, tropical beaches, frosty mountains and loads of other exciting locations. Can our feathered heroes topple King Pig, Wiz Pig and Prince Porky to save their eggs from being scrambled?

In Angry Birds Epic, players get to transform the birds into truly legendary adventurers. They can craft weird and wacky weapons, upgrade characters, armor and potions, all while wearing some pretty silly hats. The rich crafting system, gripping campaign and challenging endgame offer buckets of fun for both casual gamers and die-hard RPG fans.

“The Angry Birds characters are a perfect fit for a role-playing game because they have strong personalities and individual superpowers. They are almost like character classes from the get go”, said Jami Laes, Executive Vice President of Games, Rovio Entertainment. “Angry Birds Epic isn’t straight-up fantasy, but we have kept that weird and surprising Rovio humor in there. Get ready to head into battle with some pretty wacky equipment and powers under your belt!”

Angry Birds Epic is a free-to-play game and was soft launched in Canada, Australia, New Zealand and Singapore earlier this year. The game is free and it can be downloaded from Apple App Store, Google Play, Windows Phone Store and Amazon AppStore. Find more about the game over at epic.angrybirds.com, and on Twitter at https://twitter.com/ABepic. Check out the launch trailer here.

About Rovio Entertainment  Ltd.
Rovio Entertainment Ltd, the creator of Angry Birds™ is a global industry-changing entertainment media company headquartered in Finland that creatively combines digital with physical, breaking the boundaries of traditional content delivery. What started as a casual game in 2009 became an international phenomenon within a few months of its release. Today Angry Birds is not only the most downloaded game of all time, it is a worldwide known entertainment brand reaching out into publishing, licensing, animations, books and location based entertainment. Rovio's animated Angry Birds feature film is slated for July, 2016. www.rovio.com 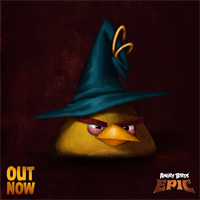 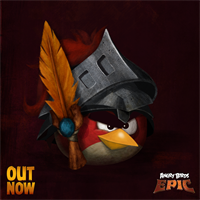 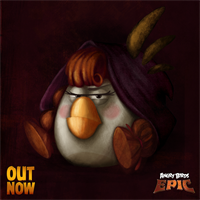