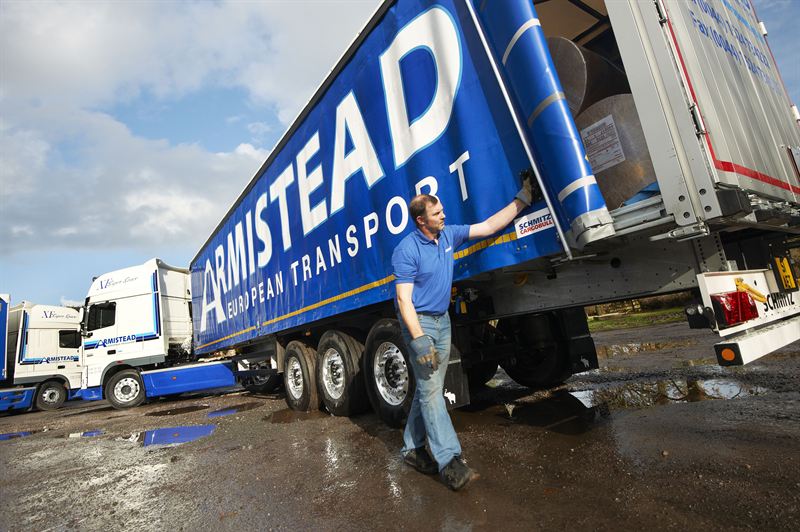 Improvements in safety, load security and efficiency are on the cards for Armistead European Transport as it puts the new Speed Curtain trailer from Schmitz Cargobull to work on its complex multi-drop operations.

The company, which predominantly manages import and export groupage work on behalf of UK manufacturers, believes the Speed Curtain will reduce driver downtime whilst also satisfying the demands of European customers in terms of load security.

“Trailers with aluminium boards are a prerequisite for many companies across Europe nowadays and many won’t allow you to load without them due to safety implications,” said Andrew Armistead, Managing Director of Armistead European Transport. “With the Speed Curtain, we can meet customer demand for load security whilst also maximising time on the road for the driver as supports are integrated into the curtain itself. As there are no boards to move or replace, it really is as simple as pulling a curtain and beginning the loading process.

“This style of trailer is ideal for bringing goods into the UK where trailers are predominantly loaded and unloaded from the side. With this in mind, the trailer will be based at our depot in Germany and used to import loads which require multi-drop distribution nationwide,” he added.

The Speed Curtain trailer complies with European Standard EN 12642 (Code XL), meaning the strength of the trailer’s body structure, coupled with the unique curtain system, has been tested and approved to allow it to act as an extra load restraint for cargo. The curtain itself – unlike conventional models – contains integrated micro-stanchions which are guided above and below by roller slides on the body; keeping the curtain under constant vertical tension.

“Previous Schmitz Cargobull equipment has performed well for us so we were keen to look at the latest innovation and understand how it could benefit us. With our drivers making up to 13 drops per day I believe we will see significant benefits,” added Armistead.

Along with the Speed Curtain, Armistead European Transport has also replaced three of its older trailers with two Euroliners and a mono-temperature reefer from Schmitz Cargobull. Together these amount to a fleet of 17 trailers and 10 tractor units.

The four new trailers have all been supplied through Cargobull Finance and will remain on the fleet for the next five years.

Schmitz Cargobull UK and Ireland is a subsidiary company of the German-owned Schmitz Cargobull Group. With an annual production of some 50,000 vehicles and around 5,100 employees, Schmitz Cargobull AG is Europe's leading manufacturer of semi-trailers, truck bodies and trailers for temperature-controlled freight, general cargo and bulk goods. A turnover of € 1.779 billion was reported in the 2015/2016 business year. As a pioneer in the industry, Schmitz Cargobull AG developed a comprehensive brand strategy early on and has consistently established quality standards spanning every level: from research and development, to production, to specialist services such as trailer telematics, financing, spare parts and used trailers.