The 2018 Bergman Year at the Royal Dramatic Theatre in Stockholm: World premiere of The Troubled; Bergman Studio; and European Bergman Conversations 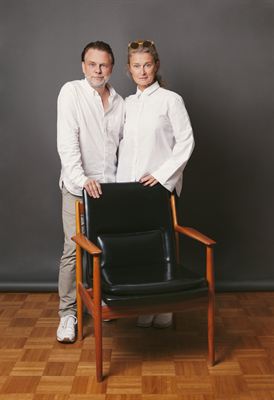 Pernilla August will direct The Troubled, based on Linn Ullmann's novel.  A new think tank is formed to develop texts for the stage: the Bergman Studio, with amongst others acclaimed director and screeenwright Lisa Langseth.

In addition, throughout the year 2018, European stage artists will hold open conversations about the contemporary theatre scene in Europe.

These news were revealed at a press conference held today, 18 September 2017, at the Swedish Embassy in London in conjunction with the Ingmar Bergman Foundation. The initial events for 2018, the year Ingmar Bergman would have turned 100, are thus in place at The Royal Dramatic Theatre (Dramaten). They will complement the Ingmar Bergman International Theatre Festival that takes place at Dramaten between 23 August and 2 September.

-- The anniversary year 2018 will be an especially important year for the festival. Dramaten will present a number of new productions alongside several international guest performances. A long list of institutions in Swedish cultural life will participate in the celebration: Dramaten, along with the Ingmar Bergman Foundation, Swedish Television (SVT), SF Studios and many others, says Eirik Stubø, Artistic and Managing Director of Dramaten.

The entire programme of the festival will be released in April.

The Bergman Year will feature the world premiere of Linn Ullmann's novel The Troubled, adapted for stage by Karin-Maria Bille and directed by Pernilla August.

--Encountering Linn Ullmann's fantastic text is like opening a Chinese box. Every time I read it, new dimensions open up. It's an enormous challenge to transform this beautiful work of literature for the stage. I look forward to directing it with great enthusiasm, says Pernilla August.

In The Troubled a father and daughter meet with a tape recorder between them. The plan is to have a series of conversations that will lead to a collaborative book. But age catches up with the father, and the recorded conversations become fragmented and rambling.

"I was his child and her child, but not their child; it was never the three of us. When I sift through the pile of photographs lying in front of me on the table there are none of the three of us together. Of her and him and me. That constellation doesn't exist." (from The Troubled)

The Bergman Studio: A group of playwrights creates new stories for our time

Playwrights who meet, exchange ideas and develop new texts together. That's the recipe for Dramaten's initiative the Bergman Studio, set to begin in September. Spearheading the initiative is Jacob Hirdwall; Lena Endre is affiliated as director.

-- The Bergman Studio is an entirely new project at Dramaten, a think tank, a forum for developing texts, inspired by the working methods at, for instance, the National Theatre Studio. We don't want to sit around waiting for stories about our time to come to us; we intend to seek them out together, says Jacob Hirdwall, who also participates as a dramatist.

--As a director I'm constantly searching for new stories and new perspectives on how they can be told. With the Bergman Studio I want to open up possibilities for more newly written plays to find their way to the stage, says Lena Endre.

Ingmar Bergman wrote his plays in contact with the theatre and its actors. Participants in the Bergman Studio will in the same way have access to Dramaten's ensemble and rehearsal rooms.

The Bergman Studio, a multi-year initiative to develop texts, is associated with the Ingmar Bergman International Theatre Festival, but work will be ongoing, also between festivals. The group's work will be part of the 2018 festival, with the long term goal that a number of the plays will be performed on Dramaten's stages.

The Bergman Studio receives financial support from the Ingmar Bergman Foundation and Svante Bergström's Theatre Foundation and is a collaboration with Dramatikkens Hus in Oslo, Norway.

Questions to be addressed include: nationalistic currents; threats to artistic freedom in countries such as Poland, Hungary and Russia; the new Europe of migrations; the significance of Brexit for the cultural life.

Among the participants is the German playwright and director Falk Richter, whose productions portray Europe on both a macro- and micro-level: what role does an individual have in today's global economy?

The conversations will be arranged by Dramaten& throughout 2018. More information and additional names will be announced at Dramaten.se, with ongoing updates.


The Ingmar Bergman International Theatre Festival was established by Dramaten in 2009 with the aim of playing a central role for national and international theatre arts by presenting performances from around the world in the spirit of Ingmar Bergman. The first festival was a great success and inspired additional festivals in 2012 and 2016. The festival is an important facet of Dramaten's international emphasis on exchanges and collaborations across borders that will contribute to artistic development benefitting both the audience and artists.

In addition to the international guest performances, Dramaten will premiere a number of its own productions at the festival. As in previous festivals, the point of departure will be Ingmar Bergman's extensive oeuvre as a writer and theatre and film director, but the festival will also include performances with no direct connection to his work. For eleven days the theatre will be filled with performances, seminars, concerts, film screenings, workshops, and so on.

Since its inception the festival has presented international productions from some of the most important names in theatre arts, such as Katie Mitchell, Heiner Goebbels, Ivo van Hove, Emma Dante, Thomas Ostermeier and many others. The theatre will also host a meeting with young, promising directors and artists from various countries. The most recent festival in 2016 attracted more than 10 000 visitors and was a success with critics and audiences alike.