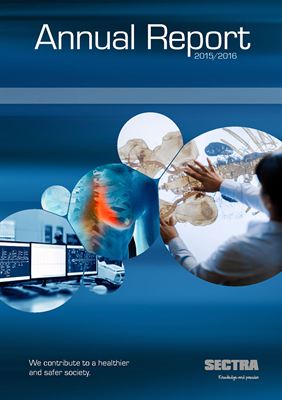 This year, the company decided to print fewer copies of the Annual Report and to limit mail distribution to Europe. Investors and shareholders are asked to refer to the digital version available on the company’s website. Anyone who wishes to receive a printed copy of the Annual Report in the mail are asked to submit a special request to info.investor@sectra.se or ph. +46 13 23 52 00. Printed copies will be distributed to these individuals starting in mid-July.

Sectra’s 2016 Annual General Meeting (AGM) is scheduled for September 6 at 4:00 p.m. in Linköping, Sweden. Official notice will be distributed not earlier than six weeks and not later than four weeks prior to the AGM in the form of a press release and publication on the company’s website. The notice will also be announced in the Swedish Official Gazette (Post- och Inrikes Tidningar) and information that notice has been given will be published in Svenska Dagbladet.

Visit www.sectra.com/subscribe to subscribe for information and receive notice of the AGM and other financial information from Sectra via e-mail.

The information in this press release is such that Sectra AB (publ) is obligated to disclose pursuant to the Swedish Securities Market Act and/or the Financial Instruments Trading Act. The information was issued to the media for publication on June 30, 2016, at 11:00 a.m. (CET).

The world needs more efficient healthcare and increased security in society’s communication and IT systems. Sectra plays a key role in meeting these needs. Sectra assists hospitals throughout the world to enhance the efficiency of care, and authorities and defense forces in Europe to protect society’s most sensitive information. The company was founded in 1978, has its head office in Linköping, Sweden, with subsidiaries in 14 countries, and operates through partners worldwide. Sales in the 2015/2016 fiscal year totaled SEK 1,073 million. The Sectra share is quoted on the Nasdaq Stockholm exchange. For more information, visit www.sectra.com.