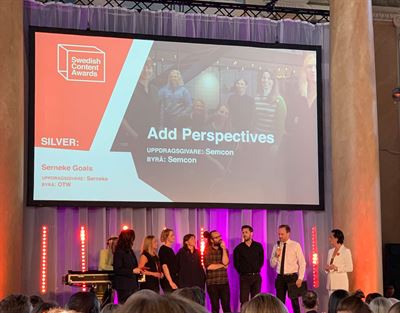 Technology company Semcon wins double awards in Scandinavia’s largest content marketing competition for the campaign Add Perspectives. The campaign, awarded in the categories ”Best Innovation and ”Best within Services” in the Swedish Content Awards, aimed to highlight the importance of more women joining the tech industry.

”It is a great honour to win in such a strong line-up. To be judged by outside experts shows that we have succeeded in creating something really special. It has been a fantastic team work”, says Per Nilsson, Communication and Marketing Director at Semcon.

The competition is held by the organisation Swedish Content Agencies and the amount of contributions this year reached an all time high with 160 campaigns. Semcon was nominated in two categories and won both “Best Innovation” and “Best within Services”. A jury of prominent experts in communication assesses for example effect and quality.

”The campaign has been very successful. The fact that we gained so much attention shows that the issue of gender equality still is far from a given, and that it is something we have to keep working on. Adding more perspectives simply makes us better”, says Per Nilsson.

With this campaign Semcon wanted to inspire more women to join the tech industry, by highlighting the importance of women in technology development. When the majority of the developers are men, there is a risk that women’s needs and life situations get overlooked. In Add Perspectives the public was encouraged to submit suggestions of products that were lacking women’s perspectives.

And in just a few weeks 550 suggestions came in – ranging from large batteries for power tools to towbars on cars. And it was the towbar, a product that has looked the same since 1932, that Semcon’s all-women team chose to focus on – creating a new automatic trailer connection concept. A solution where you don’t even have to get out of your car when connecting a trailer. A solution that would work better for everyone, regardless gender. 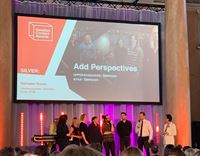 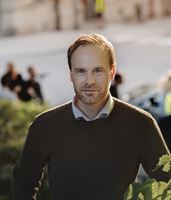