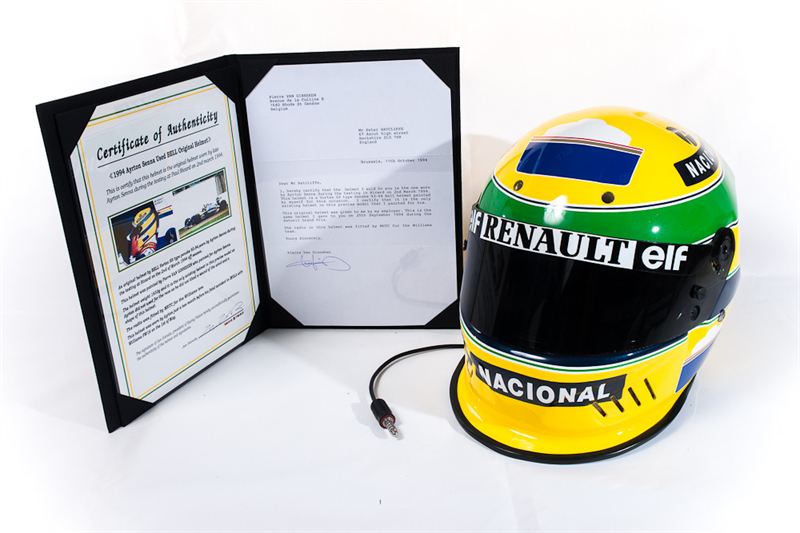 For the second time this year, Silverstone Auctions has secured a used crash helmet worn by arguably the world’s greatest ever Formula One driver, Ayrton Senna, which will be offered at the Silverstone Classic Sale on 21st July.

And if the success achieved by the sale of the previous helmet in February for £71,500 is anything to go by, then this rare test session used Bell crash helmet is sure to be one of the most sought after items on offer.

This particular piece of sporting history is Vortex Type SS Penske 93/94 helmet used in testing when Senna was driving a Williams FW16 at the Paul Ricard circuit in March 1994, just two months before he tragically died.

This incredible lot also comes complete with intercom and headphones, a certificate and a photograph of Senna wearing the helmet on offer.

Nick Whale, managing director, Silverstone Auctions, said: “Senna’s appeal remains incredibly strong, but that should come as no surprise as many consider him to be the best Formula One driver there’s ever been.

“It’s therefore credit to the team at Silverstone Auctions that they’ve yet again managed to secure for sale a truly magnificent article of sporting significance.”

As if to prove the Brazilian’s popularity, there’s also a 1990 Senna replica helmet also for auction, painted by the very same man who did the original, estimated at £5,000 to £6,000.

Fans of two wheel action won’t be disappointed either, as there’s also a signed Michael Rutter world championship helmet, estimated at £1,500 and £2,000, and a 1978 Grand Prix crash helmet signed by Eddie Kidd and Phil Read, estimated at between £500 to £700.

For full details of all the automobilia lots for auction, which also include scale models, books, paintings and medals, and many other automotive related items, visit www.silverstoneauctions.com

Notes
Formed in 2011 as a joint venture between Nick Whale and Silverstone Circuits - Silverstone Auctions is a world-class, specialist auction house for classic cars, modern supercars, all types of competition cars, modern and historic motorcycles and automotive memorabilia.

Auctions take place in The Wing, the circuit’s new £27 million building, which has space to display up to 100 auction vehicles and includes seating accommodation for up to 400 attendees.