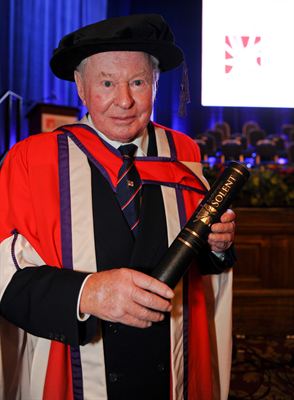 Sir Donald began his career with the Royal Navy on the naval training ship, TS Arethusa in 1943. He entered full service in 1944 and served on HMS St George and then HMS Leander.

He left the Navy in 1948 to pursue a career as a surveyor where he was the founding member of a highly successful business partnership that took over National Car Parks Ltd, which became the largest car parking company in Europe.

Sir Donald continued his support of the Royal Navy with over 40 years of charitable service, notably with The White Ensign Association of which he is the current President.

He was recruited to the Fleet Air Arm Museum in 1972, where he and his fellow Trustees developed a world class exhibition telling the story of Naval Aviation.

In 1992, he created The Gosling Foundation in order to provide charitable help to a wide spectrum of causes, with priority given to HM Forces, the police and law and order. The Foundation was responsible for providing a substantial grant to support the work to save HMS Victory for future generations.

Sir Donald received the honorary commission of Captain in 1992 and was subsequently promoted to Commodore and then Rear Admiral in March 2009. In April 2012, he was appointed Vice Admiral of the United Kingdom by Her Majesty Queen Elizabeth II.

A former patron of HMS Ark Royal, he is a Younger Brethren of Trinity House, Honorary Freeman of the Shipwrights and current President of Twickenham Unit 341 of the Sea Cadet Corps TS Saumarez. His is also Vice Patron of the National Museum of the Royal Navy.

On receiving his award of Honorary Doctor of Maritime Studies, Hon Rear Admiral Sir Donald Gosling KCVO RNR said: "I am very honoured to receive this degree from such a superb university so closely involved with the maritime industry. The Vice-Chancellor said in his speech this afternoon that the university is going from strength to strength. I know it will.

He added: "It has been a pleasure watching the smart, happy graduates collecting their degrees today. They are the future of our country."

More than 2500 students will be graduating with degrees and professional qualifications in subject areas ranging from journalism to sport science, fashion to yacht-design, and business management to TV and film production. 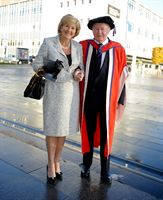 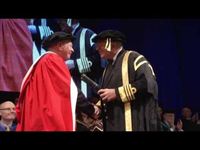