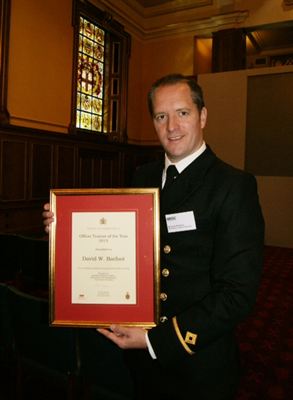 Presented by the Minister for Transport, Robert Goodwill MP, the award is for newly qualified officers. It recognises outstanding achievement in academic and professional progress, contribution to their class, determination in the face of adversity and promotion of careers at sea.

David, 35, studied a foundation degree in marine engineering and passed out from Warsash Maritime Academy this summer.

He says: “It’s a huge honour to receive such an accolade from such a renowned organisation. It adds to the confidence I have gained since obtaining my engineering qualification and gives me the belief that upon embarking on this new career, if I work hard enough and do my best, I can achieve anything I set my mind too.”

The awards include nominations from all the nautical academic institutions in the UK and their sponsoring shipping and training management companies.

David’s cadetship at Warsash was sponsored by Wilhelmsen Ship Management and managed by Clyde Marine Training. Their Training Officer, Wayne Shettle, says: “We recruited David at the start of his cadetship and it has been a pleasure seeing what he has achieved during the past three years. We are delighted David has been honoured with this award and wish him every success with his future career.”

Since finishing his studies, David has joined the Royal Fleet Auxiliary as an Engineering Officer and is looking forward to a long and successful career.

John Bazley, Head of Academic and Certification Programmes, says: “David was an excellent student; not only did he achieve exceptional academic results but he also played a key role in supporting his fellow students. He clearly enjoyed his cadetship and made the most of the broader student experiences and opportunities available to him through studying at Solent.”

David’s main motivation for choosing a career in the maritime industry is the pride he feels is associated with it. He says: “The maritime industry has a rich and inspiring history and unlike any other career, the scenery changes daily, the people you work with are diverse and the skills you learn can be adapted to a whole host of career opportunities.

“The job gives you a sense of accomplishment in that as an engineer, you are completely responsible for the ships capabilities and seaworthiness,” he continues.

Talking about his time at Warsash Maritime Academy, David says: “I have thoroughly enjoyed the sense of camaraderie shared with other students and the tireless support and belief instilled by lecturers, who were always on hand to advise and give additional time.”

For more information about courses and training at Warsash, visit warsashacademy.co.uk.

Warsash Maritime Academy is the commercial maritime arm of Southampton Solent University, and has provided first-class education, training, consultancy and research services to the international maritime industry for nearly 70 years. WMA enrols more than 9,500 students a year and provides internationally recognised certification programmes for both navigation (deck) and engineer officers from Officer Cadet level up to Master Mariner and Chief Engineer respectively. These programmes are approved by the UK’s Maritime and Coastguard Agency. The Academy also offers a comprehensive range of mandatory and non-mandatory short safety courses to the maritime industry, developing skills such as fire-fighting and sea survival, as well as continuous professional development modules for more experienced seafarers.