Deck officer cadets from the September 2012 HND and January 2013 Foundation Degree cohorts celebrated their achievement with their family and friends at the Autumn Passing Out Ceremonial Dinner on Saturday 28 November in Southampton.This special ceremony marks the completion of a three-year merchant navy training and education programme for navigation at Southampton Solent University’s Warsash Maritime Academy. The ceremony was also attended by the cadet’s sponsors and representatives from the maritime industry’s top employers including:  Anglo Eastern (UK) Ltd, Carisbrooke Shipping Plc,

Former Warsash Maritime Academy student David Barfoot has won the Maritime and Coastguard Agency’s Trainee Officer of the Year award at the Marine Society and Sea Cadets annual court in London.Presented by the Minister for Transport, Robert Goodwill MP, the award is for newly qualified officers. It recognises outstanding achievement in academic and professional progress, contribution to their class, determination in the face of adversity and promotion of careers at sea. David, 35, studied a foundation degree in marine engineering and passed out from Warsash Maritime Academy this summer.

Warsash Maritime Academy’s 151 newest officers celebrated their achievement at the Summer Passing Out Ceremony at Southampton Guildhall on Saturday 27 June 2015.The event marked the completion of a three-year training and education programme for navigation and engineer officer cadets at the Academy, part of Southampton Solent University. The newly qualified officers will be embarking on their chosen careers in worldwide shipping, working with some of the most prestigious employers in the cruise, cargo, container, oil and gas sectors. The event also welcomed representatives from many

University gets on board for Seafarers Awareness Week

‘Opportunities to Work at Sea' is the theme for this year's Seafarers Awareness Week (20-28 June), and Southampton Solent University will be helping to highlight the many career possibilities the maritime world offers young people through social media and an open day at its Warsash Maritime Academy.Co-ordinated by Seafarers UK, Seafarers Awareness Week will promote the vital role seafarers play in the UK and global economies - an industry employing 1.5 million seafarers worldwide, of which 71,310 are from the UK. The annual event involves maritime industry associations, employers,

Researchers from Southampton Solent University have received £70,000 funding from the ITF Seafarers’ Trust to examine why so few women choose a career at sea.Kimberly Karlshoej, Head of the ITF Seafarers’ Trust says, "There are a plethora of factors that influence the wellbeing of seafarers. With only a tiny percentage of the seagoing workforce made up of women, identifying and properly exploring these factors is urgently needed – both so that women are encouraged to become seafarers, and so that female seafarers feel safe, valued and respected while at sea.  The Seafarers’ Trust is

Over the past few months the University has been carrying out a business review looking at the best way to invest in, develop and grow its maritime education and training, including its Warsash Maritime Academy.The University has identified two options: to invest in the existing Warsash campus; and/or to relocate and invest in new facilities at East Park Terrace in Southampton. These options were discussed at the University’s Board of Governors meeting on Wednesday 29 April. They endorsed the proposals: that both options will be assessed in more detail but the preferred option would be

Warsash cadets sail through life-raft challenge and raise more than £13,000 for charity

Could you spend 24-hours in a life-raft? Cadets from Southampton Solent University’s Warsash Maritime Academy did just that, so far raising £13,000 for Sail 4 Cancer.On Friday 13 March, with determination and good spirit, 42 cadets donned foul weather gear and boarded life-rafts tethered to buoys in the River Hamble, where they stayed for 24 hours in wet and chilly conditions, testing their endurance and team-building skills to the limit. Supporting Sail 4 Cancer, a specialist cancer respite charity with a sporting focus, for the second year running, the challenge is designed to imitate

Warsash cadets get ready to cast-off for charity fundraiser

Twenty-four hours in a life-raft in the River Hamble. That’s the challenge facing cadets from Southampton Solent University’s Warsash Maritime Academy.On Friday 13 March 2015, while some will be laughing their way to raising money for Comic Relief, an intrepid group of 43 cadets will brave the elements and spend 24 hours in a life raft in aid of Sail 4 Cancer, a specialist cancer respite charity with a sporting focus. An experience every seafarer hopes they never have to undergo for real, the challenge tests the cadets’ courage, self-confidence, team-building skills and endurance. The

This year’s Paris International Boat Show will allow ‘Solent Whisper’ - a 5.9m sailing catamaran with a cutting-edge hydrofoil system the chance to make her international debut.The prototype of the dynamic new boat will be on display at the show which runs from 5-14 December 2014, on stand no A06 – courtesy of France Catamaran, who will be authorised distributors of the new catamaran. The new hydrofoil technology is the brainchild of Ron Price, a Southampton Solent University yacht and powercraft design graduate who is now Senior Lecturer in Naval Architecture at the University’s Warsash 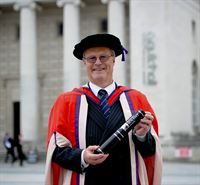 Captain Nigel Palmer OBE MNM has been awarded an honorary degree of Doctor of Maritime Operations from Southampton Solent University.Captain Palmer’s work to enhance maritime training, while he was Chair of the Merchant Navy Training Board, resulted in the introduction of a Foundation Degree programme for UK Officer Cadets, such as those delivered at the University’s Warsash Maritime Academy. On receiving his award of Honorary Doctor of Maritime Operations at the awards ceremony on 20 November, Captain Palmer said: "It is a great honour and privilege to be standing here today at the

What’s the whisper about Whisper?

On Friday 12 September Southampton Solent graduate Geoff Holt, the first quadriplegic sailor to sail solo across the Atlantic, will be unveiling the University’s latest exciting technological development – an innovation which could change the face of small boat inshore racing.This year’s PSP Southampton Boat Show will give the industry its first real look at ‘Solent Whisper’ - a 5.9m sailing catamaran with a cutting-edge hydrofoil system. Designed and built using the state-of the-art yacht design and engineering facilities at Solent’s Warsash Maritime Academy and city-centre campus, the

Andy Hindley, Chief Operating Officer for Ben Ainslie’s America’s Cup team and key industry players from the marine and maritime industry will be showcasing the training, education and employment opportunities in this exciting sector at a careers conference hosted by Southampton Solent University.The University has partnered with Hampshire County Council to inform and educate career advisors and STEM subject leaders about the wide range of career opportunities and education pathways that are available within the marine and maritime industries. Southampton Solent University’s new Vice-

Earn while you learn at sea

Warsash Maritime Academy – a part of Southampton Solent University and one of the world’s premier maritime training centres - is holding an open day on Friday 27 June 2013 (10am –3pm) to showcase the exciting study opportunities available to school and college leavers and those looking for a change of career.The maritime industry is still one of the most important industries in the world, and shipping is a vital part of the UK economy. With 95% of the UK’s international trade arriving or leaving by sea, the shipping industry offers excellent career prospects and enables students to earn

Over the weekend, a group of intrepid officer cadets from Warsash Maritime Academy (WMA), which is part of Southampton Solent University, braved rain, hail and gusts of 40 knots to raise much needed funds for sailing respite charity, Sail 4 Cancer.On Friday 21 March, the 38 cadets experienced first- hand what it would be like to be cast adrift with their ship sinking behind them, when they spent 24 hours in five life rafts which were secured to two buoys in the River Hamble.Despite fierce winds, driving rain and low temperatures, all of the cadet officers made it through the night, with 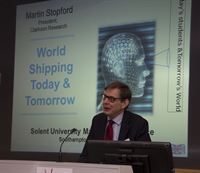 Rising fuel costs, new technologies and globalisation were recurrent themes at Southampton Solent University’s Maritime Conference 2014.Now in its fourth year, the annual conference provides excellent opportunities for staff and students from the University’s maritime courses to hear from industry experts on a range of maritime issues.During his welcome, Professor John Chudley, Dean of the Maritime and Technology Faculty, highlighted Solent’s success in producing graduates with the skills to make them successful in industry; and spoke of the importance of partnerships between staff and

A group of officer cadets from Warsash Maritime Academy (WMA), which is part of Southampton Solent University, are preparing to brave the elements and spend 24 hours in a liferaft to raise funds for sailing respite charity, Sail 4 Cancer.On Friday 21 March, 39 cadets will experience firsthand what it would be like to be cast adrift with their ship sinking behind them. They will spend 24 hours in five liferafts which will be secured to two buoys in the River Hamble. This is the first time that a maritime academy has taken part in Sail 4 Cancer’s 24 hour liferaft challenge, which raises 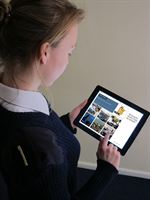 Warsash Maritime Academy (WMA), part of Southampton Solent University, is the first training provider to offer a learning app dedicated to support the training of maritime personnel.The Warsash app is available to download free from the Apple iTunes Store and it enables seafarer’s access to updated course materials, career progression charts, WMA’s maritime course offering, news and a wide range of training FAQs via an iPad. Students already enrolled on the academy’s commercial yacht and engineering courses have the additional benefit of accessing their course materials via a user name

Record numbers of visitors turned up at Warsash Maritime Academy (WMA), part of Southampton Solent University, to their careers at sea open day on Friday 24 January 2014.More than 750 visitors attended the academy’s open day. Potential future captains and ships’ officers from the UK and overseas found out what a career in the maritime industry has to offer and the training programmes necessary to qualify as a ship's navigation, engineer or electro-technical officer in the merchant navy and the superyacht industry. Visitors had the opportunity to find out more about the life of a merchant

Warsash Superyacht Academy (WSA), part of Southampton Solent University, has announced a new partnership agreement with Da Gama Maritime (DGM), industry leaders in navigation management and on board fire fighting.The Chichester-based company will join a growing group of established business partners who are helping internationally renowned WSA provide high quality services in support of the superyacht sector. Recognising the significant undertaking required by crew to meet and maintain compliance with all current and expected legislation, DGM supports professional mariners in the safety

Warsash Maritime Academy’s newest officers celebrated their achievement at the autumn passing out ceremony at the Novotel Hotel, Southampton, on Saturday 30 November 2013.The special ceremony marks the completion of a three-year merchant navy training and education programme for navigation and engineering officer cadets at the academy. Andrew Hair, director of the academy, which is part of Southampton Solent University, said: “The cadets have every reason to be proud, not only of what they have achieved during the last three years, but also of the importance of the work they have been 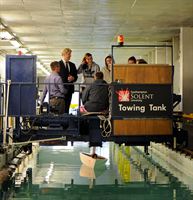 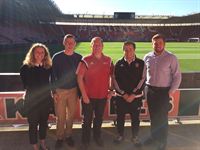 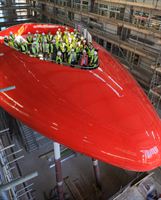 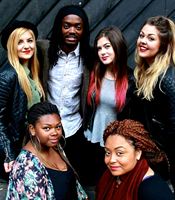 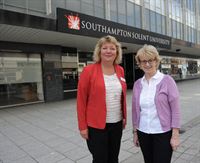 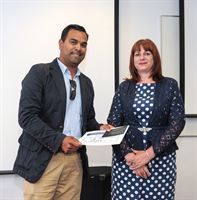