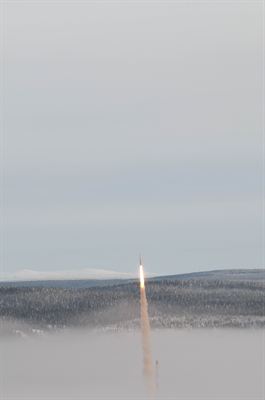 50 years have passed since the first sounding rocket was launched from Esrange Space Center. Since then, Esrange, located in Kiruna above the Arctic Circle in northern Sweden, has served the scientific community well. More than 550 rockets and 520 balloons have been launched over the years, using the vast unpopulated area. And Esrange Satellite Station has grown into one of the world's busiest ground stations, serving a large variety of customers.

SSC – Swedish Space Corporation - will be celebrating this anniversary on 22-23 October, together with customers and other stakeholders from the space industry all over the world. The celebration includes an Executive Roundtable, focusing on the coming 50 years of Esrange and space industrial development, as well as an open house at the Space Center and a gala dinner in Kiruna city hall.

“We at SSC are proud of our achievements and have exciting plans for the years to come”, says Lennart Poromaa, President Science Services and site manager at Esrange. “The ongoing modernization of Esrange will add new capabilities to strengthen its position as a leading Center of Excellence.”

Esrange Space Center provides launching facilities for rockets and high altitude balloons and has one the world’s largest ground stations for satellites.

In March 1964, ESRO (European Space Research Organization) was founded by ten European countries (Belgium, Denmark, France, the Netherlands, Italy, Switzerland, Spain, the United Kingdom, Sweden and Germany). The aim was to establish a coordinated scientific program for peaceful space research, combined with advanced research for technological development and to support European industry. Esrange Space Center was built by ESRO and inaugurated in 1966. Since July 1 1972, Esrange Space Center has been managed by SSC.

SSC is a global provider of advanced space services. We develop experiment payloads and provide rocket and balloon launch services at our unique facility Esrange Space Center. We also provide reliable access to satellites through our SSC Universal Space Network, one of the largest ground station networks in the world. Furthermore, we provide engineering consulting expertise to all phases of our customers’ space programs. With extensive experience and a solid understanding of the rapidly changing space market, we tailor innovative and sustainable solutions to institutional and commercial customers worldwide.

SSC covers the global market through its offices in Sweden, Germany, Italy, the Netherlands, USA, Chile, Australia, China and Thailand, along with the global network of ground stations. SSC was founded in 1972 and has 550 employees. Read more at www.sscspace.com.