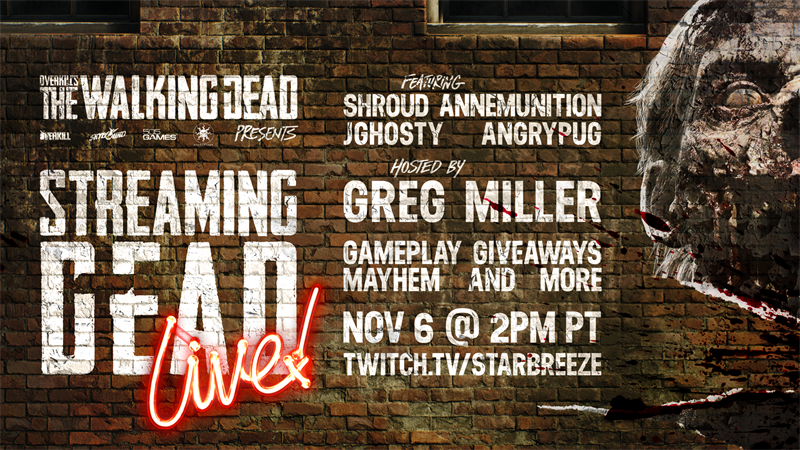 The celebration of OVERKILL’s The Walking Dead launch will feature gameplay, giveaways, mayhem and more.

With a horde of walkers, celebrity guests, exclusive giveaways and a badass survival expert, this is not your typical Twitch event. OVERKILL, the crew who brought you Payday 2, are showcasing their newest release with a killer lineup of gaming influencers. Shroud, JGhosty (Team Ninja), Anne Munition and AngryPug will team up to fight through a variety of missions throughout the broadcast.

Greg Miller (Kinda Funny), will not only host the event and preside over an action-packed itinerary, he’ll also be smashing heads IRL during the stream.

Expert survivalist and legitimate badass David Canterbury (Discovery Channel) will be popping in throughout the event, offering practical real-world advice on surviving a zombie apocalypse. During the broadcast OVERKILL will be giving away Steam codes, exclusive merch and more to viewers, who will also be able to alter the gameplay environment via Twitch to keep the gamers on their toes.

About OVERKILL’s The Walking Dead:

Inspired by Robert Kirkman’s original graphic novels, OVERKILL’s The Walking Deadis a four-player co-op action game where players must band together on a variety of missions and raids to find survivors, secure supplies and stay alive. Use stealth to evade enemies tactically, or dismember walkers limb from limb with brute force and firepower. Each of the game’s four playable characters has their own special abilities, skill trees, squad roles, play styles and background stories.

OVERKILL’S The Walking Dead will will arrive on the PlayStation®4 computer entertainment system and Xbox in February 2019. Console pre-orders are available now digitally and at most major retailers.

For more information and requests for review keys, please contact:

Starbreeze is an independent creator, publisher and distributor of high-quality entertainment products. With studios in Stockholm, Paris, Los Angeles, Barcelona and Brussels, the company creates games and other virtual reality entertainment products, based on proprietary design and licensed content. Starbreeze is behind the hit IP PAYDAY: The Heist®, PAYDAY 2®, and upcoming survival co-op FPS OVERKILL’s The Walking Dead. Under its publishing initiative, Starbreeze has together with Canadian studio Behaviour Digital successfully launched the horror thriller Dead by Daylight.

Starbreeze has set out to develop truly immersive virtual reality experiences, by integrating software and hardware in its StarVR® head mounted display, which is produced together with Acer.

Skybound Entertainment is responsible for television hits including The Walking Dead, Fear the Walking Dead, Outcast, Robert Kirkman’s Secret History of Comics, and currently holds a first-look television deal with Amazon Studios. On the film side, Skybound has a first-look deal with Universal. Robert Kirkman’s second-longest running comic series Invincible will be developed for film at Universal and as an animated series for Amazon. The interactive gaming slate includes partnerships with Telltale, Starbreeze, Skydance, Scopely, and more. Skybound is currently publishing comic book titles The Walking Dead, Oblivion Song, Die!Die!Die!, Outcast, Redneck, Gasolina, Crude, and more.

505 Games is a global video game publisher focused on offering a broad selection of titles for players of all ages and levels. The company publishes and distributes premium and free-to-play games on leading console, PC and handheld platforms as well as for mobile devices and social networks.

Publishing highlights in premium games include Last Day of June, PAYDAY 2, Terraria, Portal Knights, Assetto Corsa, ABZÛ, Virginia, Laser League, Brothers – A Tale of Two Sons and How to Survive. Free-to-play publishing highlights include Battle Islands, Gems of War and Hawken. Distribution highlights include Stardew Valley, Dead by Daylight and Inside/Limbo. Upcoming titles include Indivisible (from the development team behind Skullgirls), Underworld Ascendant (from Warren Spector and Paul Neurath), and Koji Igarashi’s next project, Bloodstained: Ritual of the Night.

505 Games has offices in California, United Kingdom, France, Germany, Italy, Spain and China. It works with a network of distribution and sub-licensing partners in all other markets. For more information on 505 Games and its products please visit www.505games.com