Gravitational Ripples: A cosmic phenomenon in a new public work

Welcome to a press conference with Lea Porsager, the artist behind the work Gravitational Ripples, Memorial for those affected by the 2004 tsunami. 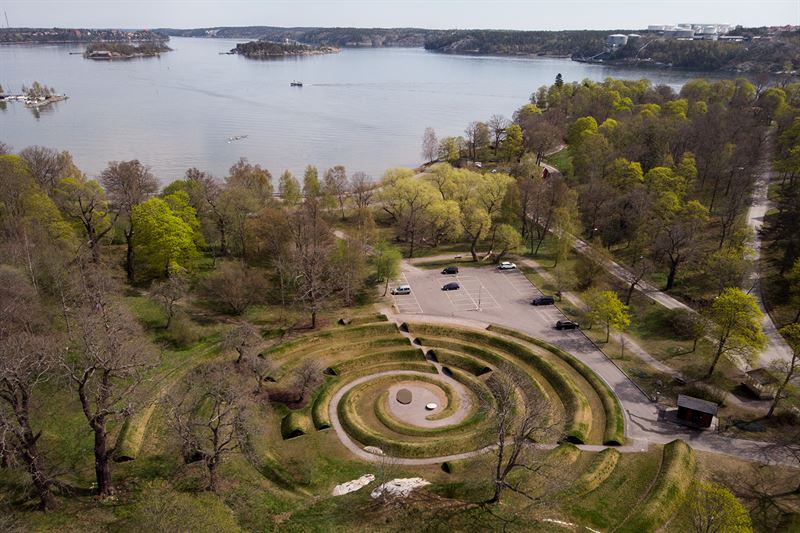 Gravitational Ripples is inspired by a cosmic phenomenon known as gravitational waves, which was predicted by Albert Einstein in 1916 and first measured by scientists in 2016. The waves arise when two celestial bodies collide, unleashing energy so powerful that it creates ripples in the fabric of space-time itself. In Gravitational Ripples, the cosmic waves are brought down to earth as a double spiral, carefully integrated in the landscape. The soil banks form a double spiral, creating a web of pathways both outwards from and inwards towards the centre, where two bronze sculptures evoke the image of orbiting celestial bodies.
– The scale is both intimate and magnificent. As a visitor I’m enfolded in the work, becoming part of it without feeling confined, says Lotta Mossum, curator at Statens konstråd.

Inspired by scientific observations and the work of feminist theorists such as Karen Barad and Donna Haraway, Lea Porsager emphasizes the intimately entangled and interwoven nature of all phenomena. In Gravitational Ripples, time itself plays an integral part. As an earthwork, the memorial is subject to the ebbs and flows of time. Following the changing seasons, the work will always be in passage, always in a state of transition.
– Gravitational Ripples, as any memorial, can never fully absolve or release the magnitude of pain that is connected to the 2004 tsunami. It can only situate it. A subtle space, real and in formation”, says Lea Porsager.

On the occasion of the first anniversary of the inauguration of Gravitational Ripples, the Memorial for those affected by the 2004 tsunami, Public Art Agency Sweden arranges a press conference to present the artwork together with Lea Porsager and curator Lotta Mossum. This is an opportunity to interview Lea Porsager, who will personally give a tour of the work.

We start the morning with a cup of coffee and a sandwich. Curator Lotta Mossum and artist Lea Porsager will then tell about the working process of Gravitational Ripples. We conclude with a tour of the work and interviews for those who wish to.
The presentation will be partly in English.
RSVP latest 27/5 to press coordinator Lina Pihl på lina.pihl@statenskonstrad.se
Please indicate if you would like to interview artist Lea Porsager and/or curator Lotta Mossum. Limited number of seats.

A public programme on 28/5
On the evening before, 28/5, a public programme will present Artist Lea Porsager and Professor Cecilia Åsberg in conversation about spirituality, science and art in a post-humanistic landscape.
More info on the public programme here
RSVP latest 27/5 to assistant curator Elena Jarl at elena.jarl@statenskonstrad.se