After summer, Stena Line will re-deploy three ships on three routes. The target is to further improve service and accessibility for customers and optimise operations in line with market developments.

"We are now implementing a strategically important development to further strengthen three of our major transport corridors. Demand for capacity is increasing and we constantly evaluate our business as the market develops and our customers’ demands. Because we have built-in flexibility in our business, we can be agile and implement these types of changes in our network with short notice”, says Stena Line's CEO Niclas Mårtensson.

Stena Line now takes the next step in the growth strategy on the Göteborg-Frederikshavn route. The RoPax vessel Hammerodde will be taken into operation in the middle of September, replacing Stena Gothica.

“We will have a product better suited for both our freight customers and passenger’s needs on this route. We will open up for car passengers on Hammerodde which will mean increased capacity on the passenger side. In conjunction with the change, we will also concentrate all traffic to Denmark at Masthuggskajen, which will increase availability and service for our customers”, says Tony Michaelsen, Trade Director of Region Denmark.

Hammerodde was acquired from the Bornholm shipping company Faergen by Stena about a year ago and will switch to a Stena Line name in due course.

In the middle of September, Stena Gothica will return to her former route Travemünde-Liepaja where she will operate together with her sister ship M/V Urd.

"We have strong growth on our routes connecting the Baltics with Scandinavia and Germany/West Central Europe. Stena Gothica will be an important addition in which we will be able to offer our customers a standardised product on all departures with two sister vessels, which will facilitate our freight customers´ transports and meet the market demand for freight capacity", says Erik Thulin, Trade Director in Baltic Sea North.

Stena Gothica replaces Stena Nordica who will be placed on the Karlskrona-Gdynia route in October, after the charter of M/V Gute is over and the ship returns to Gotlandsbolaget.

Karlskrona-Gdynia is a strategically important corridor between Sweden and Poland that has been growing steady during recent years.

"Growth is still strong between Karlskrona and Gdynia, and with Stena Nordica twice as big as Gute, we will be able to offer our customers even better accessibility. In addition, Stena Nordica has a double tier configuration, which gives significant time gains during loading and unloading. Stena Nordica will also complement Stena Baltica in a good way as they are similar vessels, which means that we will be able to offer our customers an efficient RoPax concept on all four vessels, as well as a strong passenger concept on Stena Vision and Stena Spirit, says Marek Kiersnowski, Trade Director, Baltic Sea South. 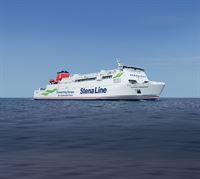