Since 1977, Stena RoRo has led the development of new marine RoRo, cargo and passenger concepts. We specialize in custom-built vessels, as well as standardized RoRo and RoPax vessels. The company leases about fifteen vessels to operators worldwide, both to other Stena companies and third parties. Stena RoRo specializes above all in applying its technical expertise to the design and production of new ships and the conversion of existing ships for delivering tailored transport solutions to its customers. We call this "Stenability". Since 2013, we have been responsible for the design and completion of Mercy Ships’ new hospital vessel the Global Mercy – the world's largest civilian hospital ship.www.stenaroro.com

Stena RoRo has ordered two new ships from the Chinese shipyard CMI Jinling (Weihai). These are the 11th and 12th Stena E-Flexer vessels in the RoPax class developed by Stena RoRo and delivery is slated for 2024 and 2025. At the same time, long-term charter contracts have been signed with the French ferry company Brittany Ferries. The ships will operate between Portsmouth in the UK and Quistreham (Caen) and St.  Malo in France, respectively, two of Brittany Ferries' primary routes. NB 275: New construction no. 11 in the Stena E-Flexer class. For delivery to Brittany Ferries in 2024.[

Stena RoRo is pleased to have executed a new charter agreement with Marine Atlantic, a Canadian federal Crown corporation. As a result, Stena has ordered its tenth E-Flexer vessel from the CMI Jinling (Weihai) shipyard.  The ship, when delivered, will run in eastern Canada between Newfoundland and Nova Scotia. Delivery from the shipyard is expected during 2024. "Marine Atlantic is a former customer of ours," says Per Westling, managing director for Stena RoRo. "We delivered one ferry in 2000 and two more in 2010 to Marine Atlantic, all of which are still in service. We were

Six weeks ahead of schedule, the Ro-Pax vessel Côte d'Opale – Stena's fifth E-Flexer vessel from the Chinese shipyard CMI Jinling (Weihai) – was delivered today. A ceremony with representatives from Stena RoRo, DFDS and the shipyard was held on site and the ship is now embarking on its maiden voyage to Europe where it will enter service during the summer. Stena RoRo has signed a long-term charter agreement with DFDS, and the ship, with its 214 meters, will become the longest ferry operating in the English Channel.   “Our focus is to adapt the design to our customers'

The Galicia, the first of three ships in the E-Flexer class ordered by Brittany Ferries was delivered on September 3. The vessel is the third E-Flexer of nine ordered by Stena RoRo from the Chinese shipyard CMI Jinling (Weihai). The Galicia will be chartered by Brittany Ferries on a long-term basis and has been especially adapted to the wishes of the French ferry company. Construction of the E-Flexers is based on a standard developed for flexibility, and each vessel is tailored to customer needs. An example of an adaptation made in accordance with the wishes of Brittany Ferries is

Between 2016 – 2018, Stena RoRo placed orders for eight Stena E-Flexer class vessels with the Chinese AVIC Weihai Shipyard. Construction is continuing according to plan and yesterday, 16 January, two ceremonies took place in the shipyard – the launching of the first E-Flexer and the keel laying of the third vessel in the series. Guests from near and far gathered in a chilly but sunny Weihai in order to witness these solemn ceremonies.The first E-Flexer, named Stena Estrid, was launched yesterday.L to R: Per Westling, CEO of Stena RoRo,Niclas Mårtensson,CEO of Stena Line,

The vessel now ordered, which will be built for LNG operation, is the sixth in the so-called Stena E-Flexer RoPax class with delivery set for autumn 2021. Stena RoRo has a further two options with the Chinese shipyard AVIC International. At the same time, the newbuild has been signed to a 10-year charter with the French ferry shipping company Brittany Ferries. This vessel, together with a further vessel in the E-Flexer series ordered last winter, will supplement Brittany Ferries’ fleet operating between Portsmouth in the UK and Bilbao and Santander in Spain. The new

The vessel now ordered is the fifth in the Stena E-Flexer RoPax class and Stena RoRo has a further three options on vessels for delivery from 2021 and onwards. The newbuild has been signed to a 10-year bareboat charter with DFDS. The new ferry will operate in the English Channel between Dover and Calais. With a capacity of 3,100 lane metres and up to 1,000 passengers, the vessel will be DFDS’s largest ferry operating in the English Channel. The ship will be designed to the highest technical and environmental standard and will offer an anticipated 25 per cent lower fuel consumption compared 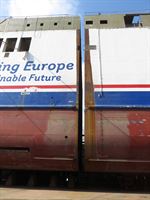 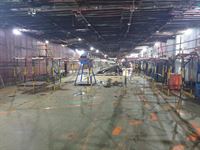 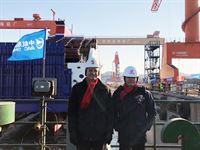