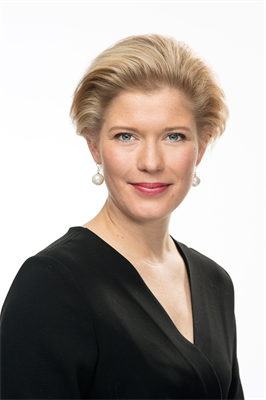 Heidi Schauman has been appointed Chief Economist at Swedbank in Finland. She comes from a role as Chief Economist at Aktia Bank, and has since 2006 held several senior positions in the Finnish banking sector, including as Senior Euro Analyst at Nordea and Senior Economist at the Bank of Finland.

“Heidi Schauman is one of Finland’s most experienced economists and a highly influential figure in the public financial debate. I am very pleased to welcome Heidi to Swedbank in general and to the role of Chief Economist in Finland in particular. Heidi’s expertise and high level of experience in areas central to our customers, along with her skilful analysis, will not only make her an excellent addition to our team – it will also increase our visibility and strengthen Swedbank’s brand in Finland,” says Anna Breman, Group Chief Economist and Global Head of Macro Research at Swedbank.

“I am truly looking forward to joining Swedbank. Swedbank is deeply engaged in society and strongly emphasises its values in corporate leadership – which is important to me on a personal level. On top of that, Swedbank’s analysis holds the highest standard. My ambition is to deliver analysis that generates value to our customers and actively contributes to spreading financial insight to a broader audience,” says Heidi Schauman, incoming Chief Economist at Swedbank in Finland.

The department for Macro Research is responsible for all global, regional and national macro analysis within Swedbank. The team of senior, client-facing analysts releases a quarterly report called Swedbank Economic Outlook, a state of the market report which focuses on the Nordic-Baltic region and global economy and includes a deep dive into current themes in the market.

The role of Chief Economist in Finland is new and will be part of a strong Nordic-Baltic macro team with the purpose of strengthening and expanding Swedbank’s business in Finland, deepening the Nordic analysis focusing on Finland and contributing to overall macroeconomic analysis, emphasising the ECB in addition to Finland.

Heidi Schauman, Doctor of Economic Sciences, 2006, Hanken School of Economics, will join Swedbank in September 2019, reporting to Group Chief Economist Anna Breman and Head of Finland Robert Sonck; she will be part of the management team in Finland.

Swedbank encourages a sound and sustainable financial situation for the many households and businesses. As a leading bank in the home markets of Sweden, Estonia, Latvia and Lithuania, Swedbank offers a wide range of financial services and products. Swedbank has over 7 million retail customers and around 600 000 corporate customers and organisations with 180 branches in Sweden and 122 branches in the Baltic countries. The group is also present in other Nordic countries, the US and China. As of 31 March, 2019 the group had total assets of SEK 2 246 billion.  Read more at www.swedbank.com